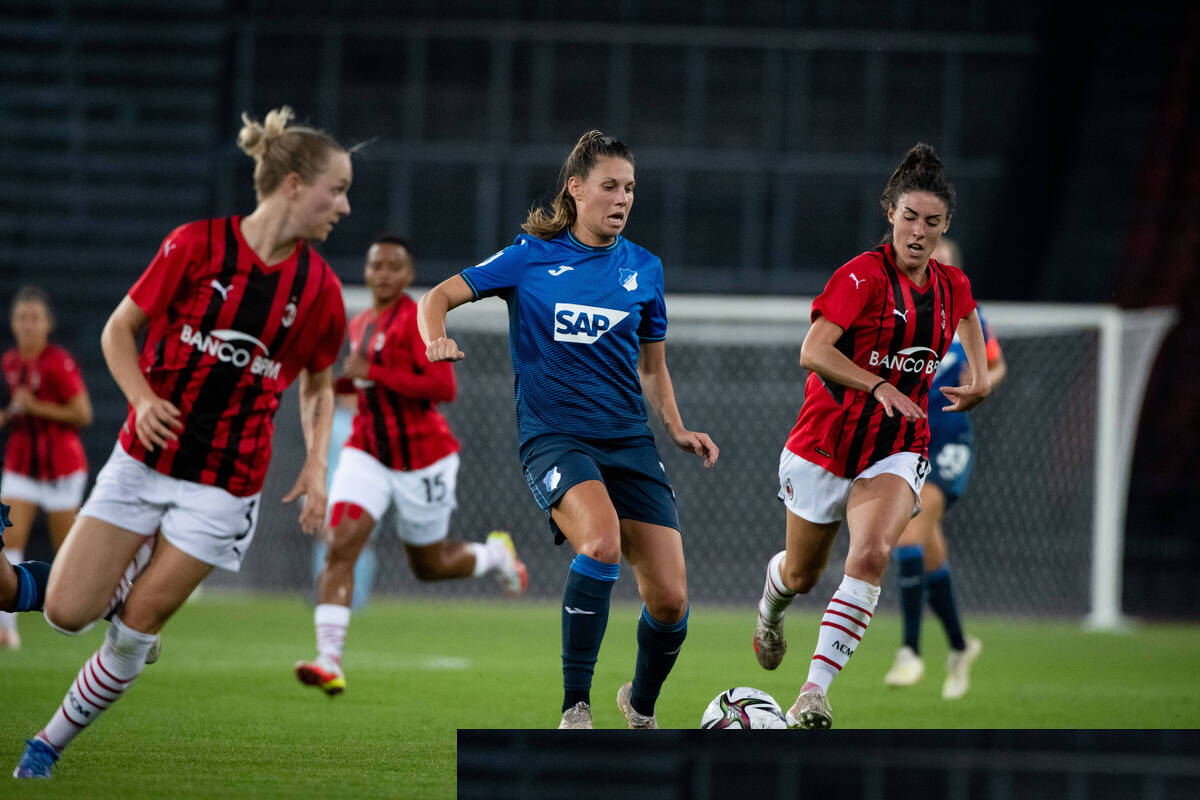 AC Milan Women lost their second qualification match against TSG Hoffenheim on Friday. The loss means that they will now exit the competition. Down below is a recap of what happened.

Milan took the field with pretty much the same players they fielded the last match, with one notable exception: Laia Codina. She was inserted into the lineup for this game. Starting your first Champions League match would be daunting for any 21-year-old. However, Laia was more than up to the task.

Milan started the game off brightly but gradually began to cede the midfield to Hoffenheim. Die Kraichgauer began to maintain possession and pushed forward. Despite this, the first opportunity of the match came from Lindsey Thomas, who had two successive shots that started at the 16th minute.

They were both saved Hoffenheim’s Martina Tufekovic. At the 19th minute, the Rossonere surged forward through a beautiful sequence of play, and Sara Thrige found the back of the net.

Unfortunately, the goal was then ruled offside as Giacinti was the one who was caught of position. In the 22nd minute, Vero played a through ball to Thomas, whose heavy touch let her down. Die Kraichgauer began mounting their own attacks, as Dongus fired from distance in the 28th minute. Her shot went over the crossbar. The designated home team would eventually break the deadlock at the 37th minute thanks to their rising star, Jule Brand. A lapse in concentration lead Laura Fusetti to put the ball into her path, and Brand slotted it home.

Hoffenheim would continue their onslaught, thanks to Milan being disorganized at the back and disjointed at the middle.

Giuliani was forced into making a double save as a result of the opponent’s onslaught. It’s safe to say she singlehandedly kept Milan in the game. Giacinti made one last attempt at goal as the half was coming to a close. Again, that shot was blocked by Tufekovic.

The second half saw both teams fielding virtually the same lineup and picking up where they left off. There was no urgency from both sides at the start of the second half, though it was the Germans who would draw second blood. After Hoffenheim won a corner, Billa sent in a dangerous cross that found the top of Hartig’s head, and she sent the ball past Giuliani. And just like that, Milan found themselves 2-0 behind and having a mountain to climb.

The Diavole tried switching things up and eventually made a few substitutions. Grimshaw, Tucceri Cimini, and Stapelfeldt made their way into the game, and Milan switched from a three at the back to fielding a four-player defence. They played better after making this change and one wonders why they didn’t field this formation from the beginning.

Despite the double gut-punch of conceding two, preventable goals, Milan did not give up. They tried to get back into the game with a few headers by Thomas and Codina at the 68th minute and the 80th minute, respectively. Miriam Longo came on at the 88th minute but had little time to affect the game.

The damage had been done, and the Rossonere’s European campaign came to a premature end.

As was noted in the leadup to this match, Hoffenheim are a strong side who were not to be underestimated. In the end, they showed why they were a better side than Milan is.

Despite this, there were a few positive moments from the Rossonere during this game.

If there was one standout from the match, it was Laia Codina. As was noted before, the centre-back is only 21-years-old and yet she plays like a veteran.

Codina was excellent during this match, as she read the opponents’ plays well and made several crucial interventions. Her technical skills also demonstrated that she was a level above most of the other players on the pitch.

She is also a natural leader, and it came through at how she shouted instructions at the other players on the pitch, including at the veteran defenders.

Milan is truly blessed to have her for the season.

Laura Giuliani, once again, proved how invaluable she was to the game through both her leadership and her reflexive saves.

Without her, the scoreline would be a lot worse than it was.

A lead-up to the match will be posted within the next few days.