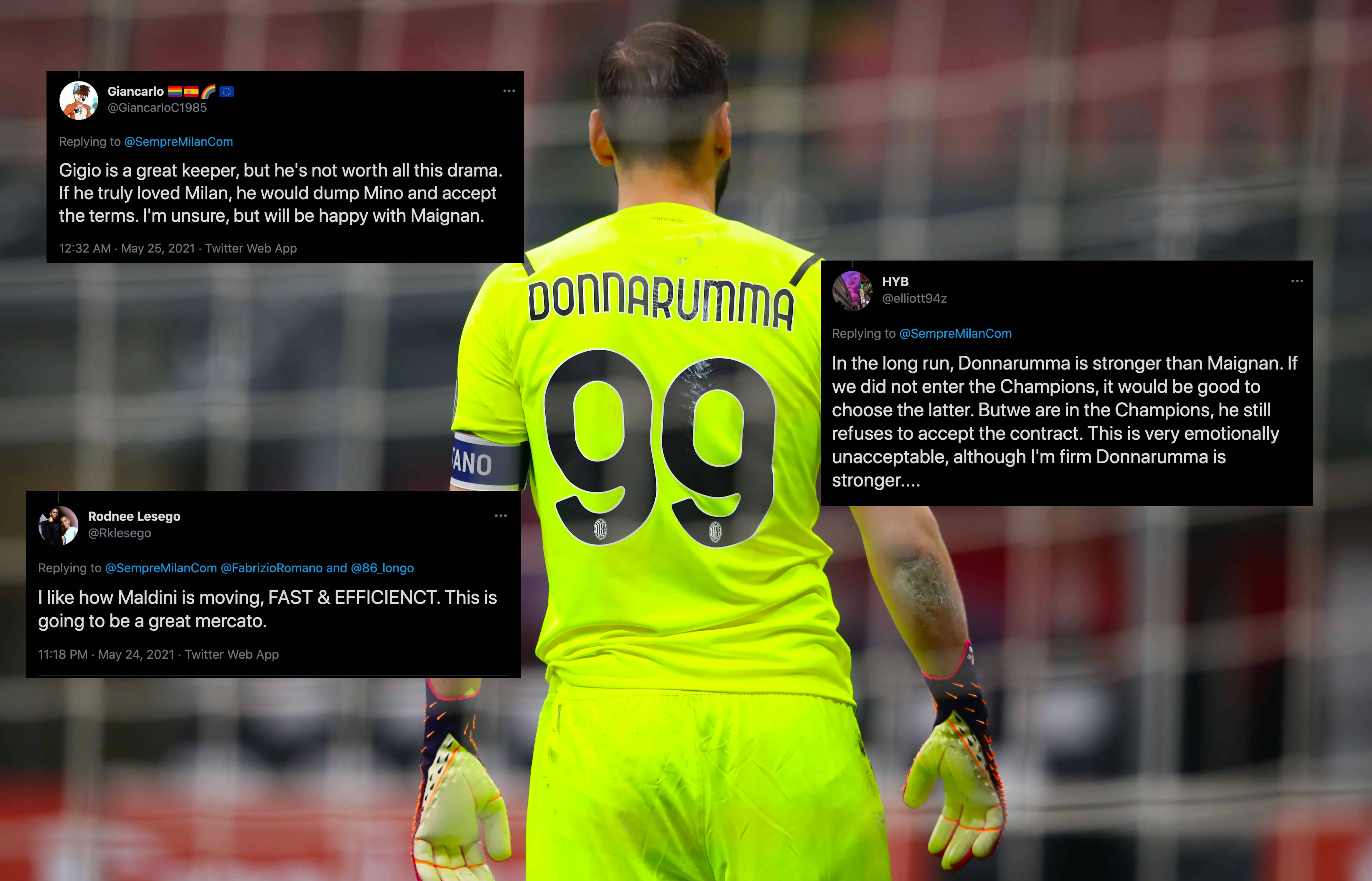 Milan fans have been rocked by the news that Gianluigi Donnarumma is all set to leave the club on a free transfer when his contract expired.

MilanNews reported how – after the 2-0 victory in Bergamo which secured Milan’s return to the Champions League after a seven-year absence – Donnarumma had already bid farewell to his companions, confessing that he will not renew his contract with the Rossoneri.

The management made another attempt to convince him to stay on Monday but without success, and thus the decision was made to close the deal for Lille’s Mike Maignan without waiting any further. The news has certainly caused a stir, with some reactions on social media below…

@hussnianqaiser: “now we have to do the same with calhanoglu. i CANNOT see milan play in the ucl with him as our number 10. get rid of him and bring in DE PAUL.”

@chedli: “Maldini and gazidis are sending a strong signal for the salary strategy and the way they want to manage the agents and the players. Milan comes first.”

@stevo1579: “Disappointing if he is going, but if is basically holding the club to ransom looking for some ridiculous deal, bye. Think Maignan will be a good replacement at way better value.”

@milanista31: “Awesome. Ciao Donnaruma. Sorry to see you go but the drama has to end. Won’t miss your agent that’s for sure. He played you perfectly.”

@texasgrooves: “#Dollarumma waited too long. Can’t blame this one on Mino….. Contract to make you highest paid GK in serie A, AND champions league? The badge is more important than any player. Enjoy Juve, Barca or wherever they hell you end up.”

@stevenrae1: “We don’t need mercenaries in this team. He has said he loves the club and is being paid a top class wage already. His love for money outweighs his love for the club. So let him leave, Maignan will be a more than capable replacement.”

@k77shc: “Donna has brought this on himself. Im sure Maldini will play this impeccably and say that all top clubs need to players for every position. Still hope Donna stays and we sell one of them next season for good money..”

@giancarloc1985: “Gigio is a great keeper, but he’s not worth all this drama. If he truly loved Milan, he would dump Mino and accept the terms. I’m unsure, but will be happy with Maignan.”

@littlejd813: “This kid is no chump, his team just won the French League. Don’t have to worry about the drama every other year. Thank you Gigio for everything, I hope your happy in your new situation.”