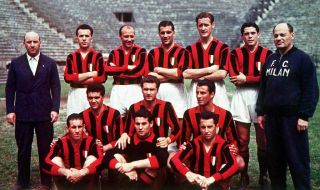 In their 120 year plus history, AC Milan have had many legendary coaches, including Nereo Rocco, Arrigi Sacchi, Fabio Capello and Carlo Ancelotti.

These are managers that have been remembered for not only the trophies won, but in the way they were won. Each of those four men on the bench have left an indomitable mark on the Rossoneri, however, the manager that brought back success to the club have often been forgotten.

He goes by the name Lajos Czeizler, and along with technical director Antonio Busini he led a startling revolution at Milan.

Both men played the game professionally with differing levels of success. Czeizler was a goalkeeper and played in the 20’s with local club Vac. Busini was a midfielder of high repute and represented the likes of Padova, Bologna and Fiorentina and was a Serie A champion with the Rossoblu. He was on the books of Milan in the late 30’s but never made an appearance for the club.

By the time the Riccione born Busini retired, he moved into the managerial ranks with il Diavolo in 1940. Czeizler on the other hand began his time on the bench at the age of just 30 and managed in Poland, Sweden and Italy with Udinese and Lazio. It was in Scandanivia that the Heves-born tactician really made his mark with IFK Norrkoping.

In the country’s 10th largest city, he led the club to dominate Swedish football in the post World War Two years, capturing five league titles and two domestic cups in just six seasons. In that team was a centre-forward by the name of Gunnar Nordahl and attacking midfielder Nils Lieldholm who led the team. Sweden won the 1948 Olympic gold medal for football and their football was garnering interest all over Europe.

AC Milan took a keen interest and signed Nordahl in 1949. 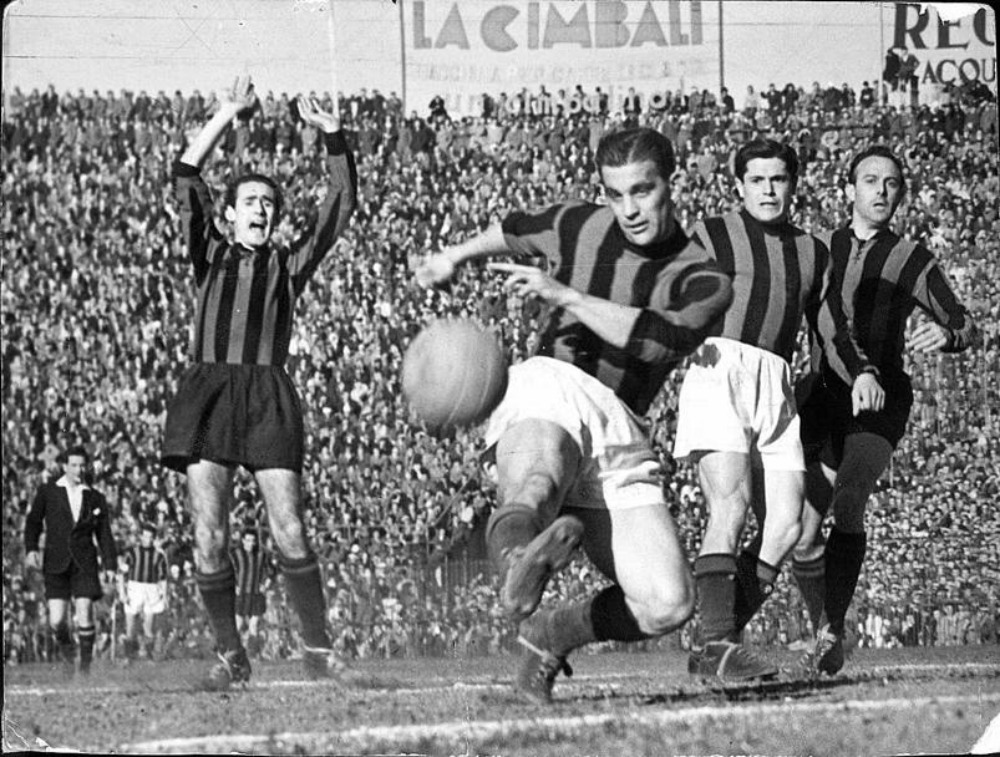 At that time in the club’s history, they had been going through a real barren spell, having not won a title since the old Italian Football Championship in 1907. They had to look on as arch-rivals Juventus and Inter dominated Calcio, along with il Grande Torino, but change was coming.

Nordahl spearheaded the Rossoneri attack in the second half of the 1948-1949 campaign, they finished third behind the Granata and Nerazzurri, however, his influence with his words was a stroke of genius. In the off-season, Nordahl suggested not one, not two, but three elements to the club president, one of which was Czeizler and two of his Swedish team-mates in Lieldholm and and national team captain Gunnar Gren.

Czeizler philosophy was simple, yet very entertaining and highly effective: attack, attack and attack some more.

With the famous Gre-No-Li leading the forward line along with Renzo Burini, the Lombard team would go at the opposition full throttle for the entire 90 minutes with incessant pressure and purpose. As with any revolution, it took some time for the team to gel and it was not until November that they were in full gear.

The Derby della Madonnina against Inter saw the team go up 3-0, only to lose in the end 6-5. In the aftermath of the clash, the team and manager were severely criticised for their tactics by journalists, but Czeizler came to the defense of his team. He claimed it will be worth it in the end.

The match that really gave an insight in what the team would eventually achieve was a rivalry game versus Juve in Turin. The Bianconeri took the lead, but what was to follow was as Nordahl would later describe as ‘masterpiece’.

First Nordahl tied the game with a superb finish after lovely build up play, Gren gave the team the lead with a left footed effort and Lieldholm made it 3-1 with a right footed goal. Nordahl soon made it 4-1 all before 30 minutes had even elapsed. The striker would eventually complete his hat-trick and with further goals by Burini and Enrico Candiani, the final score was 7-1 to Milan.

It was the first match broadcast live in Italy on television, and what a show the Rossoneri put on for the audience. Milan would still finish second behind La Vecchia Signora, but they broke the record for most goals scored in a single season with 118 and Nordahl finished as the Capocanniere.

They showed what they were capable of, but now it was time to add substance to the style and a trophy to the cabinet.

However, Czeizler knew that while the attack would take care of itself, the team needed some defensive cover at the back, so he added Arturo Silvestri to the rearguard. The right-back was signed from Modena and in addition to his primary objective of stopping opposition attacks, he added the extra weapon of being a dynamic player going forward too.

The squad started with a perfect six wins from their first six matches to lead the Serie A standings. They headed to face Juve, with the Piedmont club out for revenge after the thrashing they suffered several months earlier. Lieldholm gave the Rossoneri the lead, but a Karl Hansen penalty meant a share of the spoils.

A key tactic employed by Czeizler was that he employed Lieldhom that bit deeper. It allowed the playmaker to fully utilise his full range of passing, vision and ability to run into the box from deep to score that surprised the other teams. Il Barone – as he became to be known – would finish with 13 goals that campaign, with most of them coming from his intelligent late runs.

The title battle was between Milan and their two traditional rivals Juve and Inter.

March of 1951 would prove to be a pivotal point in the season, as Milan triumphed over both the Bianconeri and Nerazzurri to take a firm grip on the Scudetto. Needless to say, Nordahl had a huge impact as he got his name on the scoresheet in both encounters.

On the 10th June, the title was decided, but not how one might have thought though. Milan were hosting Lazio, while Inter were playing away to Torino. All the team in red and black had to do was beat the Biancocelesti and the Scudetto was theirs, however unexpectedly they lost 1-2.

It left the door fully open for Inter, but in another twist to the tale, they lost to the Turin team; when news came through, the Milan players, coaching staff, management team all rejoiced with insane passion, as the club celebrated its first league title for 44 years.

The fans would not be left out as they jumped the fences and hugged, kissed and serenaded the players like heroes. The party lasted long into the night as more than four decades of disappointment, hurt and false hopes had finally been put to rest. 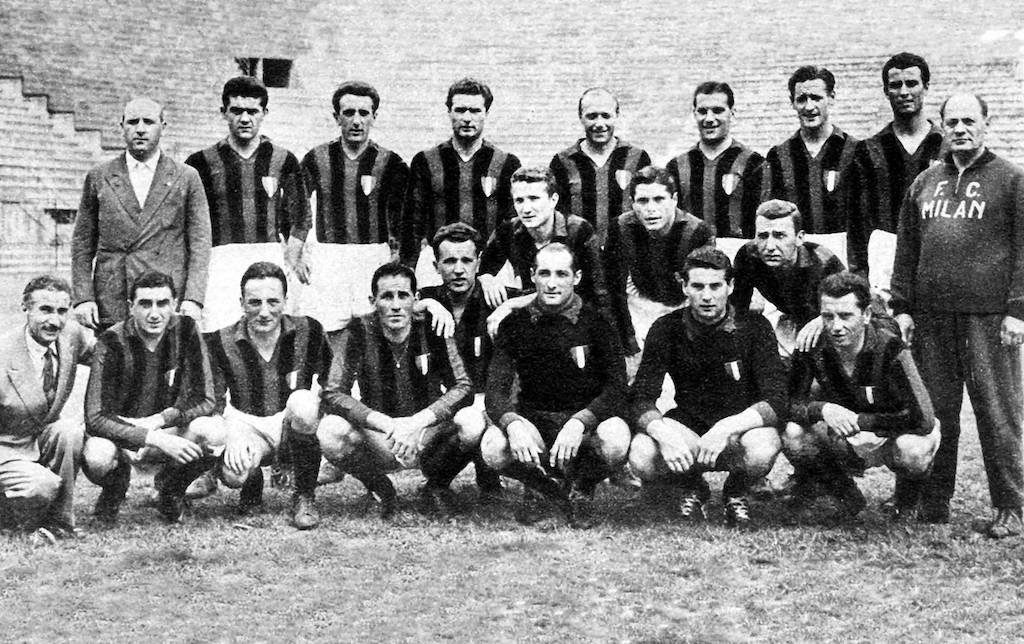 However, there was more to come from this extraordinary team.

Having won the Italian title they qualified for that summer’s Latin Cup. The tournament was a four team contest played between the champions of France, Italy, Portugal and Spain.

Milan played their semi-final match just 10 days after their Scudetto win against LaLiga champions Atletico Madrid. Czeizler would not let the team rest on their laurels and made it a point that just like in Italy, they must stick to their attacking philosophy on the continent as well.

The players heeded the manager’s words and from the very first minute they attacked the Spanish side. They never allowed them to settle, and the traditions of the club that had permeated in the seven decades since were being born. It was Venice-born Mario Renosto operating from the wing that stole the show that night at the San Siro.

He dribbled past defenders with his trickery to score the opener, set up Nordahl for his lone strike and completed a hat-trick of the highest quality, as he led his team to a 4-1 victory. It meant a place in their first ever European final, where they would meet French champions Lille who had overcome Portuguese winners Sporting CP.

Renosto however would not make it to the final that took place four days later, as he was in Buenos Aires playing for a Torino 11. He would not be missed though, as Nordahl plundered a hat-trick, while Burini and Annovazzi grabbed goals as well as Milan ran out 5-0 winners. It was a dominant display by Czeizler’s charges and his team talks about always attacking and keeping to their philosophy paid rich dividends.

So after so many years, Milan ended their wait for the Scudetto and added their first piece of European silverware all in the space of a couple of weeks. These triumphs would not have been possible without the tactics, man-management and foresight of Czeizler, the work ethic and recruitment of Busini and the Swedish trio of Nordahl, Liedholm and Gren who’s play on the field enthralled all who would have witnessed them.

What a special combination that was for Milan.