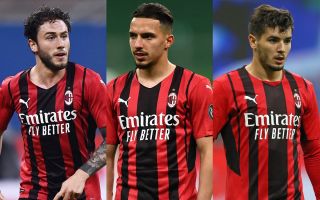 Having faced Pro Sesto and Modena, Milan will now begin the ‘tougher’ part of their pre-season, taking on the likes of Real Madrid and Valencia. And before you know it, the 2021/22 season will be underway.

The Rossoneri have been quite active on the transfer market and there’s more to come, by the looks of it. It’s interesting, therefore, to take a look at their current squad and how the XI would look if the season began today.

Compared to this past season, just one new signing (excluding Fikayo Tomori, Sandro Tonali and Brahim Diaz) would make it into the team and that’s Mike Maignan. The following XI, of course, is excluding all injuries and current absences.

Ibrahimovic could end up missing the season opener and if that’s the case, then Olivier Giroud would take his spot. It would take the number of new signings in the XI up to two, but there’s still time for Paolo Maldini and Ricky Massata to bump it up even more.

READ MORE: The fixture slots Serie A will have in 2021/22 and how it will affect Milan