How Milan should line up against Man Utd – defensive match-ups; forced choices in attack

AC Milan boss Stefano Pioli has some selection dilemmas that he must resolve ahead of Thursday night’s Europa League clash against Manchester United.

The Rossoneri make the in good spirits having emerged 2-0 victors over Hellas Verona at the weekend, which cemented their second-placed spot in the Serie A table.

They will face a United side who are also confident having won the Manchester derby 2-0 at the weekend, but one that are in a bit of chaos with selection issues due to injuries themselves.

Below is how we think the Rossoneri should line up…

This one doesn’t need too much explaining. The undisputed number one between the sticks gets the nod for arguably the club’s biggest European game in years as he hopes to build off a clean sheet against Verona and put the error against Udinese behind

Davide Calabria should remain in the line-up after another solid performance at the Bentegodi, while we are leaning towards the Kjaer-Tomori pairing because we saw its effectiveness in Rome and also the captain Alessio Romagnoli has started the last two games, meaning he would be in line for a third start in nine games, so in a way it is natural rotation.

Our gut feeling though is that Tomori and Theo Hernandez – who is reportedly fit enough to start – must play on the left side of the defence to try and neutralise some of United’s pace on the counter. The way the Red Devils try and play is very similar to Milan in that they try and contain, press at the right moments and burst forward at speed. The more pace in the back line for Milan, the better.

Again, this is based on the assumption that Sandro Tonali is fit enough to start the game, but it seems an obvious choice to put the Italian in as he showed impressive glimpses in the first 45 minutes against Udinese and has demonstrated his capabilities as a deep-lying playmaker in recent weeks.

Franck Kessie – a very obvious candidate for man of the match in the win over Verona – simply has to start. He is the leader in front of the defence and will be needed to keep the home side quiet, he organises those around him, wins virtually every duel and has also shown his capability in the build-up phase.

A huge part of the battle for Milan will be stopping the supply of Bruno Fernandes to the wingers and to the centre-forward. The speed and combative nature of Kessie and Tomori in the spine of the side should help keep Bruno, Martial and Dan James somewhat in check. 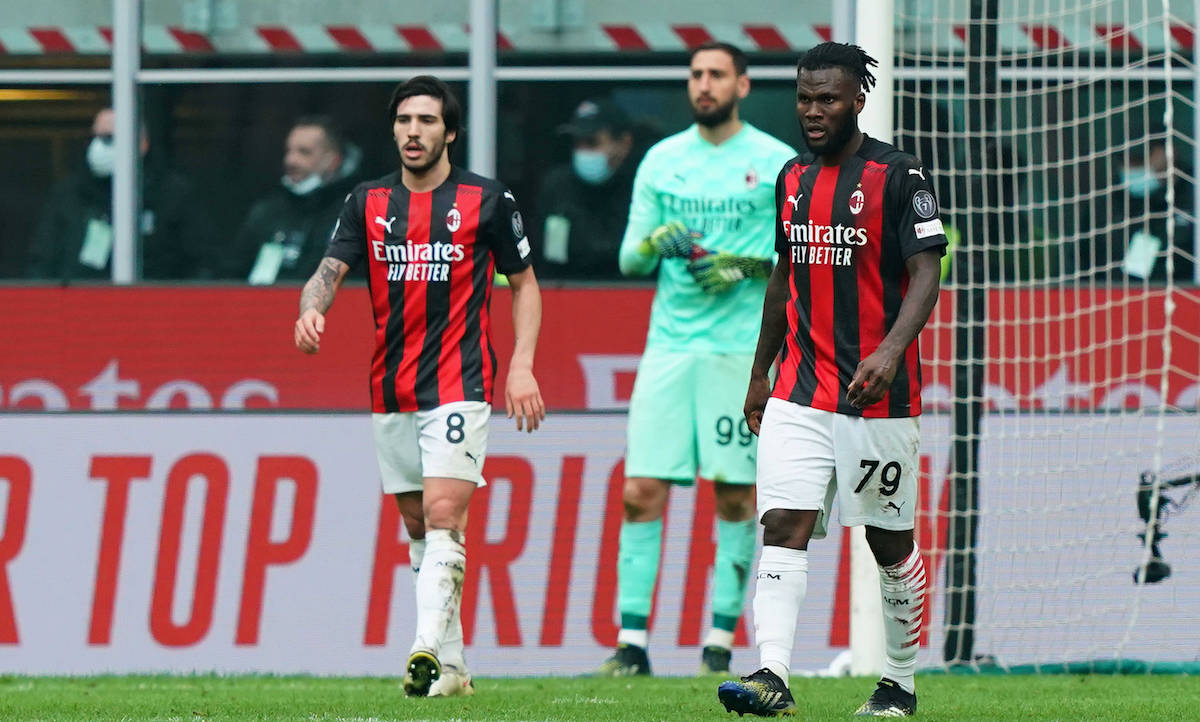 Watch out for Soualiho Meite to come on and play an important role, as his best performances have come off the bench, with the Frenchman appearing to show application and dynamism to try and make things happen.

The attack virtually selects itself by virtue of necessity due to the fact Calhanoglu, Ibrahimovic, Mandzukic and Rebic are all injured. We have gone with the same front four that caused a typically solid Hellas Verona back line some problems on Sunday afternoon, as instead of having a single point of reference in Leao the forwards all interchanged positions and made it difficult for the Gialloblu to stick to their assignments.

In truth it would have been nice to have had Rebic’s work rate and explosive nature (as seen vs. Roma) available, but with Castillejo and Saelemaekers on the flanks plus Krunic down the middle Pioli should feel pretty comfortable from a pressing and work rate standpoint as all three work exceptionally hard off the ball and can really help form a compact 4-5-1 out of possession.

The man tasked with finding a precious away goal will be Leao, though the Portuguese forward has not scored since early January. The feeling is that the 21-year-old can cause United’s pairing of Maguire and Lindelof some problems if he were to spin them around but he has not been good enough in recent games at utilising his movement and his athletic attributes.

Leao does love the big stage though and tends to perform when he has the added motivation to do so, which will be especially necessary given that Rebic, Ibra and Mandzukic are not far away from return meaning his performances will be under even more scrutiny.