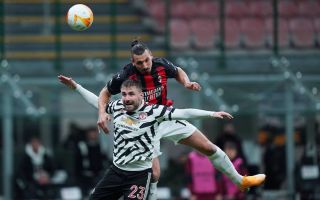 There was no shortage of media headlines in the days leading up to the game about whether Ibrahimovic would feature during the game and to what extend he would, and he did get on the field at San Siro.

Pioli made a double substitution 20 minutes into the second half as Ibrahimovic made his return to the field against his former club, coming on alongside Diogo Dalot as Kalulu and Castillejo made way.

The Swede forced Henderson into his next save as the Swede was found in isolation at the far post against Shaw, winning the header but seeing it saved well by a strong hand.

Ibra was interviewed by Milan TV at the end of the game, with his words relayed by MilanNews and translated below.

On the chance: “I was sure I could get it in, but it was too central. As against Inter, I hit the goalkeeper and I’m sorry, it had to go in.”

On the goal conceded: “We played well and created several chances. If you don’t score, there are times when they put pressure on you. This moment has come and they scored. When you make mistakes, you pay for them.”

What did you tell your team-mates at the end of the game? “We are so disappointed because we have played two great matches. Today we conceded a goal that we shouldn’t have taken, we grow from these situations. Now let’s think about the next match.”