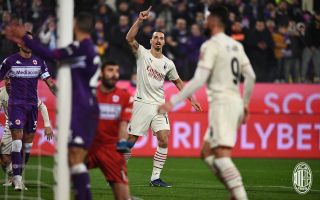 Milan head coach Stefano Pioli may change his plans regarding how he will use Zlatan Ibrahimovic and Olivier Giroud, according to a report.

This morning’s edition of La Gazzetta dello Sport (via MilanNews) writes that prior to the game against Fiorentina Pioli’s plan was simple: start Ibrahimovic against La Viola and play Giroud from the first minute against Atletico Madrid. However, the Swede’s brace in Florence could change his ideas and now he is looking to start in the Spanish capital too.

With Milan three goals down it was once again Ibrahimovic who netted twice in quick succession to really give Pioli’s men hope. Even if the equalising goal never came, the Swede seems to have found his best form and he has now played for 90 minutes twice in the last two games.

In terms of condition Ibrahimovic is fine and wants to play as much as possible, especially in matches like the one on Wednesday at the Wanda Metropolitano which represents a win-or-bust situation for Milan. Pioli is now thinking about starting him, but if he is not 100% then Giroud is poised.

READ MORE: Maignan could start at the weekend after trimming four weeks off recovery time