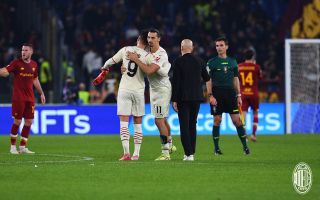 AC Milan striker Zlatan Ibrahimovic praised the performance that the team put in during their 2-1 victory against Roma at the Stadio Olimpico tonight.

He nearly got another one tonight as he opened the scoring with an excellent free-kick from around 20 yards out and then thought he had doubled the lead with a superb finish, though he was marginally offside. He did however draw a penalty which Kessie converted to make it 2-1.

Ibrahimovic spoke to DAZN at the end of the game and offered a reflection on what was yet another decisive three points, with his comments relayed by MilanNews.

“Today was a great match. We played with a lot of confidence. It’s a great victory, we knew it wouldn’t be easy. We need to continue with this confidence and with this pace,” he said.

On his goal: “Every now and then I surprise, today on a free-kick. Failure is part of the success, we keep trying. 101km/h [the shot speed]. Normally it goes faster, it goes to 200. Maybe it’s the age. I need them, I feel alive: the more they whistle the more alive they are. Adrenaline is part of everything, it takes you a lot.”

On the victory: “We want to win by fighting until the end; with one less it was not easy: we showed great character. We also know how to suffer. The guys on the pitch played a great match.”

On the Scudetto: “Let’s try, we believe in it. The season is long, we must have consistency in every match. We believe in it, but it’s still early. One match at a time. Now the Champions League, then the derby.”