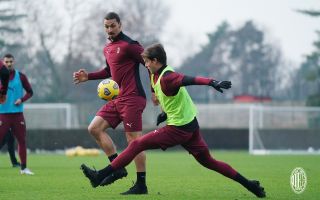 MN: The latest on the condition of Ibrahimovic, Leao and Rebic after Sunday’s training

Some encouraging news has arrived from today’s training session at Milanello as three forwards are getting back towards full fitness, a report claims.

MilanNews are reporting that the recovery of Zlatan Ibrahimovic, Rafael Leao and Ante Rebic is continuing. The three forwards each joined the first part of today’s squad training session entirely with the rest of the group.

Immediately after that Rebic and Leao continued with some individual work as the Croatian winger did technical drills while the Portuguese returned to the group. Finally, Ibrahimovic carried out the entire session with the group.

Milan will resume Serie A action at San Siro on Thursday night when they welcome Jose Mourinho’s Roma, of course looking to record a league double over the capital side after beating them away from home earlier in the campaign. Given the lack of forward depth that has been available to Pioli, having all three back would be huge.