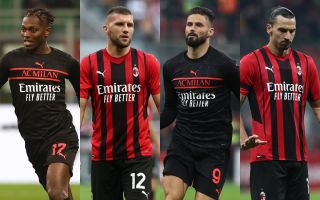 CorSera: Pioli hoping to have key forward trio back against Roma as Ibra check results return

There is good news on the injury front for Stefano Pioli heading into the Christmas break and in view of the next game against Roma, a report claims.

Zlatan Ibrahimovic was out of the game against Empoli on Wednesday night due to discomfort in his knee while Ante Rebic, Rafael Leao, Davide Calabria and Pietro Pellegri were forced to miss the match due to muscle problems, in addition to the long-term absentee Simon Kjaer.

According to il Corriere della Sera (via MilanLive), the latest checks on the Swede showed nothing to be worried about and this means that the 40-year-old will therefore be available for the match against Roma on January 6.

All being well, Ibrahimovic and Giroud can be rotated in the second half of the season while Ante Rebic and Rafael Leao will do the same on the flanks, and Davide Calabria should be back as the starting right-back too, with hopes the injury crisis is over.