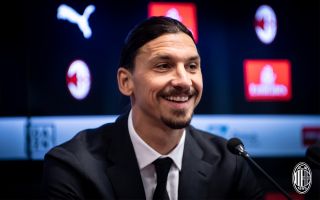 Ibrahimovic on the future: “Who wouldn’t want to belong to Milan?”

After yesterday’s internal friendly game with Hammarby, Zlatan Ibrahimovic sent a clear signal to AC Milan as the contract renewal remains a hot talking point. However, there is still a long way to go for the parties.

As stated by Gazzetta Dello Sport in today’s edition (via Milanlive.it), the 38-year-old looked rather tired during the game, also with a bandage on his left ankle. However, in terms of condition, he’s certainly ahead of those who only have worked at home.

After the game, Ibrahimovic spoke to Swedish outlets about his future with the Rossoneri, not giving too much away (read here). However, the main hint seems to be that he’s willing to negotiate. The Italian newspaper published some more quotes.

“I have to go back to Italy because I have to honour the contract. I’m a person who wants to get involved and achieve results, I want to improve my team.

Should the striker decide to stay, then the contract wouldn’t be an issue. There is already a one-year-extension clause in the deal that Ibrahimovic signed in January, so now it’s just a case of convincing the player.