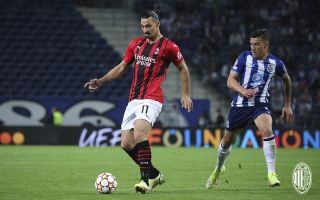 Ibrahimovic pulls no punches: “We must also win in the Champions League, not just in the league”

Zlatan Ibrahimovic believes that Milan played their worst game of their Champions League campaign so far during the 1-0 defeat against Porto.

The Rossoneri have made qualification for the knockout stages a very unlikely possibility after suffering a third defeat on the spin in the competition, and the third by just a solitary goal as Luis Diaz’s second half strike gave the hosts all three points at the Estadio do Dragao.

Milan were below par for virtually the entire game and certainly didn’t deserve anything from it despite the fact there was some controversy surrounding Diaz’s goal with Bennacer flattened in the build-up.

Ibrahimovic spoke to Sky Italia after the game and offered his thoughts on what exactly went wrong but began by discussing his condition.

“Well, today I played more minutes than in the last game. I miss the time to find rhythm. This is to find the feeling to get back on the pitch,” he said (via MilanNews).

“We must continue, the world has not fallen because we lost today. We are fine in the league and we must continue like this but we must also do it in the Champions League. There are three games left and we must try to do something. We must not lose confidence. I prefer to stay on the pitch than off, but slowly now I’m back.”

Milan can still qualify for the last 16 but they need to win at least two of their final three games and in the meantime hope for Liverpool to keep steamrolling through.