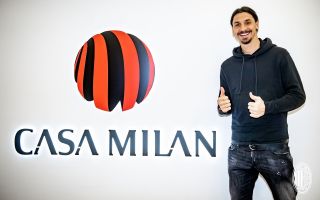 New signing Zlatan Ibrahimovic has revealed some of the background as to why a return to AC Milan did not materialise a year ago and why this year was different.

The Rossoneri announced the news of the Swede’s return via a statement on their official website, with Ibrahimovic having put pen to paper on a deal which will run until the end of the season, with the option for an extra year.

He arrived in Milano on Thursday to complete a medical at La Madonnina clinic before enduring more fitness tests and eventually signing his contract at Casa Milan.

Ibra then travelled to Milanello to meet Stefano Pioli who he spoke to for around 45 minutes, and even underwent a voluntary unscheduled individual training session in the evening.

The striker gave his first interview to Milan TV on Thursday evening, but Friday morning marked his official presentation at Casa Milan, and he discussed why now is the right time to return.

“After the last game with LA Galaxy, Maldini called me and we talked a bit. I had a lot of offers. I was looking for the adrenaline. I also talked a lot with Boban. It wasn’t a difficult decision,” he said (via MilanNews.it).

“I didn’t want to leave Milan in 2012, I did not agree. The important thing is that now I am here again, he will do everything to improve things. Milan is my home, I love this club.

Why didn’t the return materialise a year ago?

“I had spoken to Leonardo, but I did not feel ready to return. I was fine in Los Angeles.

“I went to America to feel alive after the injury. Now I feel more alive and I am ready to play again in Italy.”