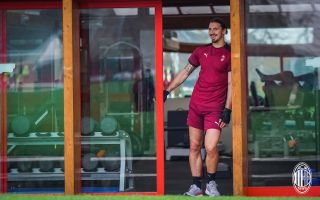 AC Milan striker Zlatan Ibrahimovic has revealed that he feels angry ‘everyday’ and offered his thoughts on what should be an interesting 2021-22 season.

Ibrahimovic scored 15 goals in 19 league appearances this season, which is an incredible record considering his age, but he has struggled with a few injuries and Milan have been without him quite a lot.

The Swede has missed over 30 games for the Rossoneri this season (all comps) and it’s clear that the injuries have held him back a lot. If he had stayed fit, he would have probably had a good lead in the Capocannonieri race.

Ibrahimovic gave a long interview to La Gazzetta dello Sport in which he discussed a number of different topics, starting with revealing the number of times he has been angry this season.

“Everyday. I feel alive like this, in my opinion it is not bad to get angry. It is also a way to show how much you care about what you are doing and the people around you. If you always say that everything is fine, what kind of life is it?”

New team-mate Mike Maignan said that when he was a kid at PSG he spoke back to Ibrahimovic, something that the Swede actually appreciated.

“Sometimes I charge people like that. Sometimes you have to be tough, sometimes you have to be light-hearted. Sometimes I joke and sometimes I send a message. This time we reached the Champions League, that was the goal, but I want to win. It’s an ongoing challenge and I’m enjoying it. Now I have more responsibility, I feel more a leader. The relationship with the club is clear, the players have to work harder every day to bring Milan back to where it used to be.”

Ibrahimovic laughed when asked if he could become Pioli’s assistant, responding: “I’ve already done it a year and a half. Now let’s look for other things to do.”

Milan managed a second-placed finish during the 2020-21 season, their highest since 2011-12 and one that allowed the club to end their seven-year drought of finishing in the top four. Now, attention has turned to next season and the possibility that the team could even go one better.

“There are teams that suffer financially after the pandemic and can no longer move as in the past. Atalanta and Milan seem to me to be the most solid clubs from this point of view. Then we will see what happens on the pitch. It will be like another chapter for Milan. A difficult season, we will have to fight with Atalanta, Inter, Juve, Naples… A good balance. I’ll try to win again, and my team-mates with me.”