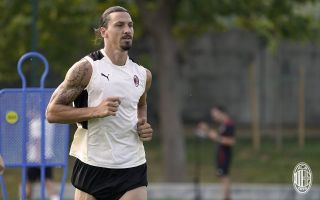 Ibrahimovic shares his thoughts: “Messi and Ronaldo? I’m no worse than them”

Zlatan Ibrahimovic is ready to get back on the pitch after recovering from the knee surgery he underwent in June. In fact, he could even feature in AC Milan’s clash against Lazio this Sunday, having trained with the team for a while.

The Swede, who will turn 40 next month, is a very important player for the Rossoneri and it’s certainly a boost that he soon will be back in action. And as we all know, rightfully so, Ibrahimovic feels he’s one of the best in the world.

In an interview with France Football (via MilanNews), which will be released in full tomorrow, Ibrahimovic spoke about how he rates himself compared to the top footballers in the world. He made it clear that he’s up there with Leo Messi and Cristiano Ronaldo.

“Messi and Ronaldo? If we talk about intrinsic qualities, I’m no worse than them. If, on the other hand, we consider the trophies then yes, I didn’t win the Champions League. When the collective works, the individual benefits. The individual cannot be good if the team is not good. I think I’m the best in the world,” he stated.

There’s no denying that Ibrahimoivvc’s journey has been nothing short of incredible, but few will perhaps agree that he’s on the same level as Messi and Ronaldo. Either way, he’s a very important player for Milan and that’s all that matters.