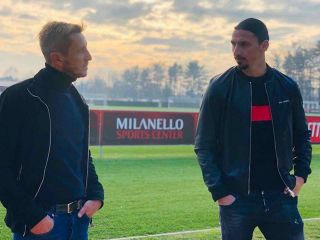 Since his arrival in January, Zlatan Ibrahimovic has certainly been a key player for Milan, turning things around along with Stefano Pioli. Once again, he managed to prove all the doubters wrong with his performances.

This season, the 39-year-old has scored ten league goals in just six games, which is absolutely stunning. Although the Rossoneri have got the results without him as well, it’s clear that his presence is very important for their style of play.

Ibrahimovic constantly pushes his teammates to do better and this has been a key factor for the Rossoneri. The broken mentality, built by a lack of confidence, has been fixed and is now completely different – which can be seen on the pitch.

In a long and revealing interview with Sky Italia, as cited by MilanNews, the striker spoke to former Milan man Massimo Ambrosini about his impact. It’s an interesting read, for sure, and one that only makes you admire him more.

What effect does Milanello have on you?

“I feel at home. When I’m here I do everything that needs to be done, I’m not in a hurry to go home because I’m already home. I was already here 10 years ago with you great players. I don’t remember my first day… Ah yes, the strength tests, I set new records (laughs).

“The week before we had played Barcelona-Milan and then the following week I was with you, in the tunnel everyone was telling me to go back to Milan with you. There was Galliani, he had come to my house in Barcelona. He told me ‘I won’t move from here until you come with me’.

“My wife asked me who he was, I told her ‘An important person’. At Barcelona the situation was not clear, I still don’t have the answers on what the real problem was. There was Milan and other teams, but I told myself I know Milan. A great club like Milan, if they call you, it stimulates you and means something.

“With the players who were here, I had a lot of stimuli. I was hoping, indeed I knew that we would win something. I like these challenges, when people talk against me they charge me, they give me adrenaline to show that it’s not what they say.”

What do they say?

“Always the opposite. We work in silence and demonstrate on the pitch. Now it is another situation, 10 years ago it was another challenge. Everyone said it would be impossible, these things charge me. If I can do something like that it’s bigger than going to play in a great team already at the top. Here you have to be the one to bring the team back to the top, you have to make others understand what it means to be at the top.”

Were you afraid when you signed up?

“I was not afraid. It was the same situation as when I signed with United, everyone said that the pace of the Premier was too tiring. I do the opposite of what everyone says.”

Do you feel different?

“Very different. Ten years ago I was another player, ten years ago I went back to go get the ball. Today I don’t do it, I think that if I go back I waste energy and I’m not useful in attack. You weren’t very positive for this year, but I already told you “I’ll take care of it”.

“Ten years ago there were players who had a different status, more personality and character. It was another ego. Today I get angry the same, maybe even more. But I have balance. If I see that someone can’t do it then I change my strategy. I used to treat everyone the same. I can’t change you, you have to be yourself.

“The person must be himself, when you are young you are more rock and roll, but now I understand the situation more. I ask a lot, if you don’t train well I’ll tell you something, I don’t accept a wrong step, all this still today. Then it’s up to you how you take it, how you train and how you play. My philosophy is this.”

On Seedorf: “It was another experience, you had already won a lot. I wanted to win again, but it was just a matter of bringing out the latest adrenaline. I loaded them all. But there were also many who charged me. Seedorf was a great character, one of the strongest players I have played with, he also had a great character. He answered you.”

On Pioli: “Every year that passes the players change. We have a coach who asks to play in a precise way. I like how we play, he has found a way to get the most out of my qualities. He makes me play in the best way to help the team. He talks a lot with me and asks me a lot as he asks the team a lot.

“We can’t relax, and here I am. You must not be satisfied. We know that the team is not like Inter and Juventus who have larger squads. We are young, maybe someone is not ready to play all the games. The sense is that we have to win if we want something, they are not used to it. Against Rio Ave there was the pressure, they started playing for something. They have some experience but they are not used to it.”

Can the team aim for the Champions League?

“I think so. I played 8 months here, I think so. But it’s not just quality or talent that matters, sacrifice and discipline count. All small details that make the difference.”

“I don’t like it when they always agree with me. It looks like I’m the boss, but that’s not the situation. I’m myself and then we discuss, otherwise it’s not good for everyone to agree with you and not express themselves. Comparison is important.”

When you stop what are you going to do?

“I don’t know. I have two children. With them I put pressure and discipline, they have to understand how things work. Discipline, respect and sacrifice. It’s the detail that builds you. Coach? I don’t think so. It’s a very stressful thing.

“As long as I can continue to feel good playing. When you are old we only talk about the physical condition, like with Totti. There is no lack of qualities. If one has rhythm, he can do it. That’s the important thing. You don’t lose quality, it’s impossible. It’s a physical matter.”

“That’s ego, they don’t accept it’s over. You think you are still the strongest, you are not realistic. I don’t have this ego, I’m a realist. After the injury, I went to America to start at 0. I told Mourinho not to call me, I was not the same Ibra as before.

“After two years in America, I felt alive, so I went back to Europe to see if I could do it, that’s why I signed for 6 months. It doesn’t matter what people say, you have to be confident but also be realistic. At first, I wasn’t feeling great, I hadn’t played for a month. It’s hard to get into the rhythm.”

The confirmation of Pioli and the renewal: “Pioli asked me what I wanted to do. I told him ‘Enough, I won’t continue’. I was worried about the sacrifices and I thought about the family that is in Sweden. If I do another year like these six months, no. Pioli told me ‘I respect you’. The next day he called me back: ‘It’s not that simple. Yesterday I left you too easily. If you don’t stay here it will be another thing’.

“I told him ‘Mister, I’ve decided’. After that, I went on vacation. The contract was not important, at this age it’s useless. I just need respect and values. The challenge, however, was beautiful and difficult. But I also came to think that I didn’t want to have regrets. So I called Mino and told him ‘Close everything, let’s go on’. But at the beginning, I said no, that next year I would not stay.”

On the injury at United: “I always said I would stop at the top, and I thought I would stop because I was 35. I was going to enter a new chapter of my life with my family. But after the injury, I returned to the pitch and I realized I had to continue. I thank football.

“At this level I will play as long as I can do something, if I can’t I don’t want to. That’s why I signed up for 6 months in January, it was to be honest with them and with myself. I didn’t know if after six months if I would still be here.”

Are you okay in Milan?

“Very well, but I miss family. It’s not easy, it’s the first time I’ve been in a club without them. The sporting goal takes away the lack of family from my mind.”

On Covid: “We are in a particular moment. In January, Milan was better than 10 years ago, an international city. Then Covid arrived, the city suffers a lot and I’m sorry.”

On stimuli: “There is too much positivity here, I don’t like it, it’s too easy now. I like it more if they attack me and therefore I grow even more. I have stimuli but I need more adrenaline. I can’t do nonsense. But I want something to happen, these things charge me.”

READ MORE – Marseille director slams Maldini for ‘disrespectful’ comments: “Thauvin has a contract with us”