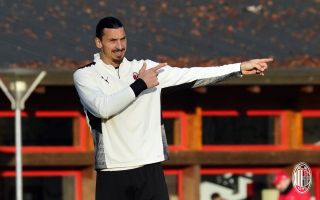 ML: Ibrahimovic has three records in his sights ahead of league games and Liverpool clash

AC Milan striker Zlatan Ibrahimovic will be on the hunt for three records in the coming games, according to a report.

MilanLive writes that if Ibrahimovic were to score today against the Neroverdi, he would become the joint 10th-highest scorer in the history of Milan by matching Pippo Inzaghi at 73 goals, with others such as Kakà (77) and Liedholm (81) not far away.

In the event of a brace, Ibrahimovic would become part of the very small circle of players who – from 2000 to today – have scored more than 300 goals in European leagues. The two who have done it are Cristiano Ronaldo and Lionel Messi, who are at 480 and 475 goals respectively.

Finally, Zlatan will be on the hunt for a record in the Champions League in the final group game against Liverpool which will come early next month. He wants to break Francesco Totti’s record as he is the most senior goalscorer at 38 years, 1 month and 29 days. Ibrahimovic – who is over 40 years old – would break this.