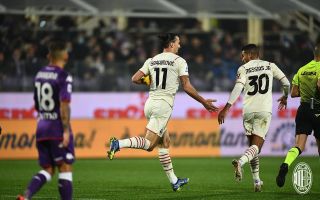 Mediaset: Ibrahimovic in top condition as he breaks Totti’s record – Pioli’s temptation ahead of Atletico game

Every time it looks as though AC Milan are heading towards an empty treatment room, a sequence of issues arise that puts them right back in difficulty.

Claudio Raimondi spoke on SportMediaset (via MilanNews) and recalled how Milan were beaten in the league for the first time in 208 days by Fiorentina, a game that showed they still cling to Ibrahimovic. He remained on the pitch for the entire match in Florence just as he did in the derby, but now his physical condition is almost at the top, so much so that at 40 years and 48 days the Swede has become the oldest player to score multiple times in a Serie A game, overtaking Francesco. Totti.

The Swede also wants to make his mark in the Champions League and it is unlikely that he will remain on the bench on Wednesday against Atletico Madrid. Pioli is tempted to ask Ibra for an effort and then maybe use Olivier Giroud from the start against Sassuolo.