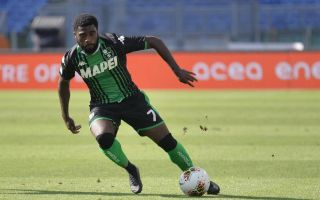 Il Mattino: Napoli ahead of Milan and Man Utd in race to land Sassuolo winger

Napoli are currently the team that are on pole position to land Sassuolo winger Jeremie Boga, according to a report.

Boga has been in fantastic form for the Neroverdi since his arrival from Chelsea and in this season in particular, amassing 11 goals and four assists.

According to Il Mattino (via MilanNews), Jose Callejon’s imminent departure from Napoli means that sporting director Giuntoli is in the market for a replacement and the Partenopei are ready to accelerate their efforts to land Boga.

The Neapolitans are ahead of all the other clubs, including Milan, and therefore would be on pole if Sassuolo open up to the idea of signing the former Chelsea man.