The AC Milan Women beat Inter Milan by a score of 4-1. The match was noteworthy for several reasons, chief among them being the fact that Valentina Giacinti was the first Milan player to score a hat-trick in the first half since Jose Altafini.

Highlights of thee match are below…

Milan line-up in a 3-5-2. The key difference between this match and their last few matches was the fact that Yui Hasegawa was fielded as a right centre-mid. Normally, she plays on the left. 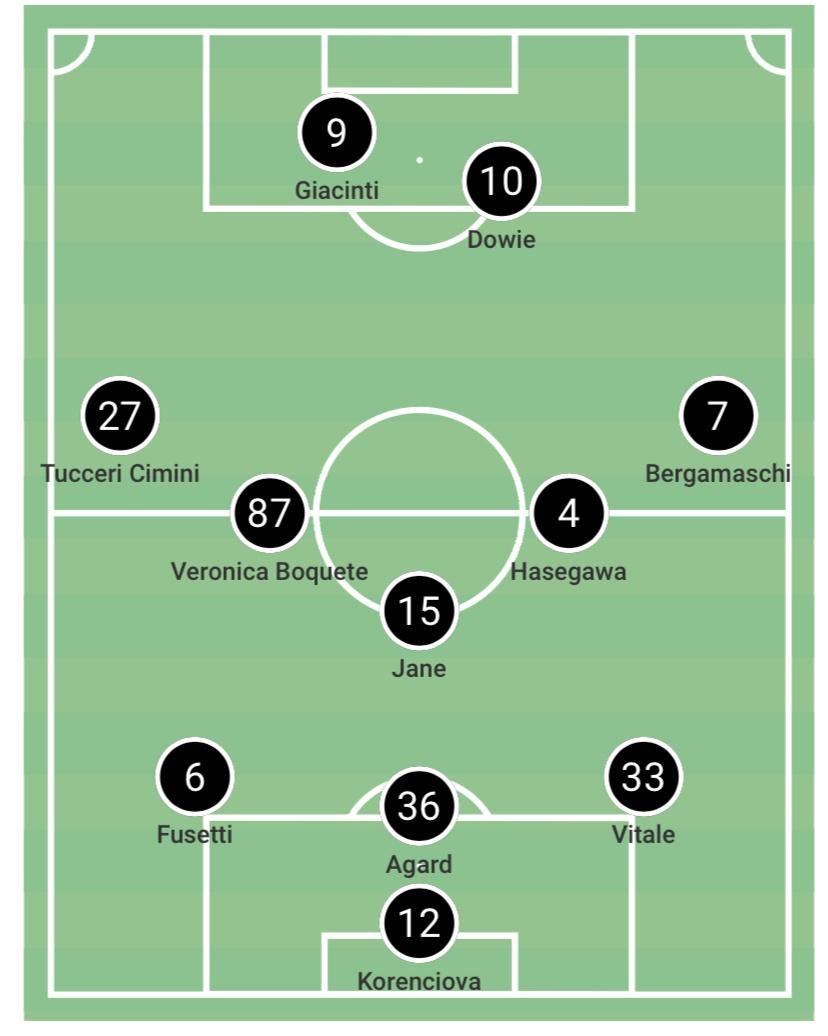 The midfield trio of Jane, Vero and Hasegawa played very well during this match. Jane was the holding midfielder who held things down in the middle of the park, while Vero and Yui provided balance in-between the lines. 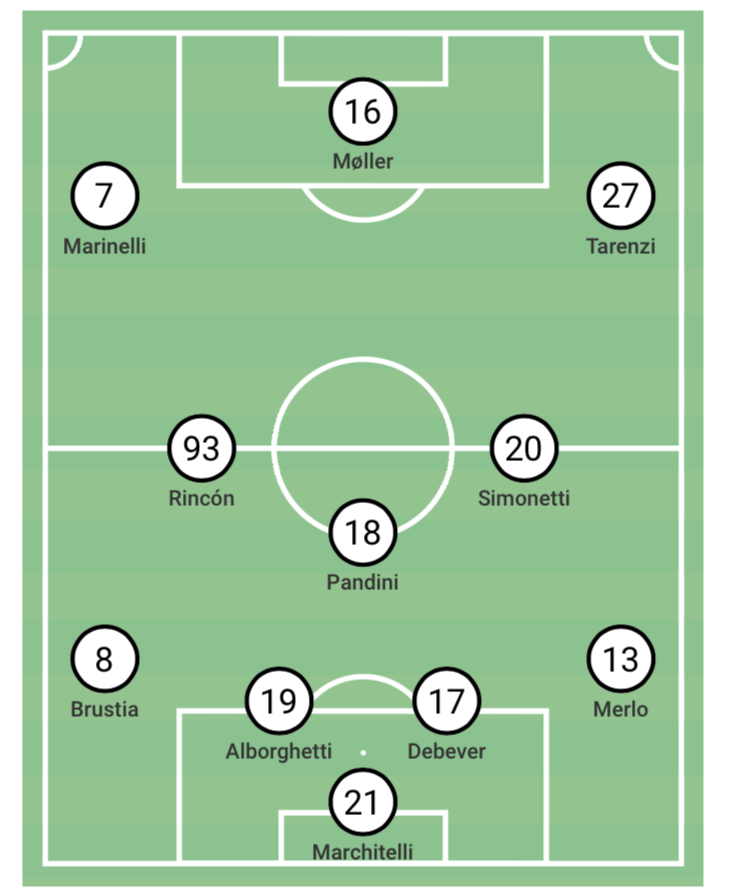 The Nerazzurre chose to field Caroline Møller as a false-nine in this formation. Perhaps they were looking to build off of her performance during the last derby, where Møller scored a stunner against Milan that helped them win that match.

And for the first few minutes of the match, it nearly worked.

The first few minutes of the match were characterised by uncertainty for Milan. Inter Milan began the game by attacking and trying to take advantage of Milan’s defensive frailties. One example of this happened in the seventh minute of the match, as Yoreli Rincón hit a powerful shot that was saved by Mária Korenčiová. The Rossonere were fortunate that it didn’t go in.

Milan were unable to hold the ball for the first ten minutes, as the Nerazzurre pressed and probed them. As a consequence of this, Inter took the lead through Møller, who scored yet another fantastic goal. The midfielder found a lot of space in front of goal and took a long-range shot that found the back of the net. Milan’s poor defensive marking was the main culprit here. 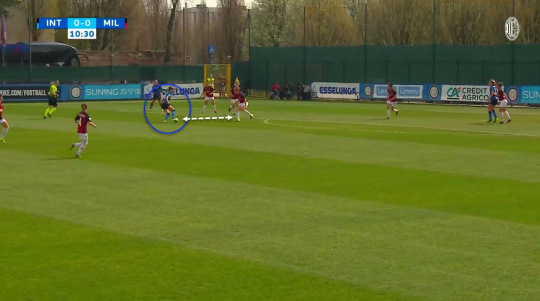 For the first 15 minutes, it seemed like Milan were making the same mistakes they made during the last match, and were heading towards another defeat. The fact that Inter’s Beatrice Merlo ran unchallenged through the midfield just compounded that feeling.

It took both teams at least fifteen minutes to absorb the pressure from one another, and to get their heads in the game. It also took quite a while for Milan to change their defensive positions, thus giving the Nerazzurre room to explore while they were doing so.

The Rossonere gave Inter too much space near the penalty area, which resulted in the Nerazzurre taking a few shots from outside of the box. They did so mainly because Milan’s defense didn’t employ any close player-to-player control or couldn’t stop them from shooting.

The tide began to turn for Milan after Giacinti scored at the 15th minute. The goal came began with a buildup of play through the midfield, after Hasegawa made an intelligent pass to Jane, who then fired a powerful shot from outside the box. As Inter’s Chiara Marchitelli parried the shot, Giacinti was well-positioned to score a brilliant header.

The goal was also her 50th for Milan, and she made history with by becoming the first Rossonere to score 50 goals in the league. From that moment forward, Milan slowly but gradually, began to take control at the match.

The Rossonere were then awarded a penalty at the 30th minute, after Vero Boquete’s precise cross into the box found Natasha Dowie, who then accelerated towards goal. Marchitelli then fouled her and left her on the ground, and was thus awarded with a spot kick. Giacinti stepped up to take it, then scored her second of the night.

This was then followed up by Dowie sprinting down the right-wing, then passing the ball to Giacinti, who then completed her hat-trick. Valentina’s movement was exceptional, as she quickly moved towards the ball and used her body to launch the ball with incredible strength and precision.

During the second-half, Milan tried to keep the ball in their own half to prevent Inter from attacking on the wings. It was a tactic they employed during the first-half of the derby, only they were more successful during the latter half of the game.

During the second half, Inter only had one shot on target at the 72nd minute, thus forcing Korenciová to make a great save. Other than that, Inter failed to properly threaten Milan’s goal.

The Rossonere, on the other hand, would get their fourth goal at the 65th minute. They would  thenemerge as the deserved winners of the Derby della Madonnina, and swing the momentum back into Milan’s favor. And with that win, Milan is once again, red and black.

The stand-out and the subs

Natasha Dowie should be commended for her performance during this match. Dowie has proven to be a great team player, as she was involved in the build-up of three of the team’s goals. She also provided the assist for the team’s third goal, and she has registered five assists this season.

She is, inarguably, one of the team’s best players.

While one could argue that this is ‘effective’ game management from the team, it has proven to be costly at times, more specifically during the last Coppa Italia match against Inter. It would have been nice to see Carolina Morleo, who was substituted late in the match, play more.

However, maybe she’ll get to play more minutes at a later time.

For now, we’ll just say that Ganz’s tactics worked well during this game. Perhaps he can think about revising his approach to substituting players later.

Valentina Giacinti scored four goals during this match. She also became the first Milan player to score a hat-trick during the first-half since José Altafini.

The Rossonere skipper also has 16 goals for the season, and she’s second in the league to Juve’s Cristiana Girelli.

Valentina Giacinti has proven to be truly invaluable for Milan, and her performance just cemented this.

Yui Hasegawa also played quite well during this match. The midfielder excelled in her role, despite being fielded on the right and not on the left as she usually is.

The fact that she did so is a testament to how talented she is as a player.

Her touch, vision, dribbling, passing and sense of balance are all exceptional. The way she spun around and played the ball directly into Giacinti’s path is a testament to this.

Yui was one of the keys to winning this game and Milan are fortunate to have her.

Not surprisingly, Milan dominated this match. The team had 54% possession and registered 17 shots on target. They also had six corners while Inter had four.

They put on a thoroughly dominant display and were the deserved winners.

Serie A Femminile will go on hiatus for the international break. Italy will play a friendly against Iceland on April 13th.

The Rossonere will look to take on Napoli CF then. Napoli have lost their last two matches and are barely hovering above relegation. Napoli also have Milan’s newest signing, Guðný Árnadóttir, playing for them.

Expect Milan to carry the momentum from this win into their next match as to win that game as well.