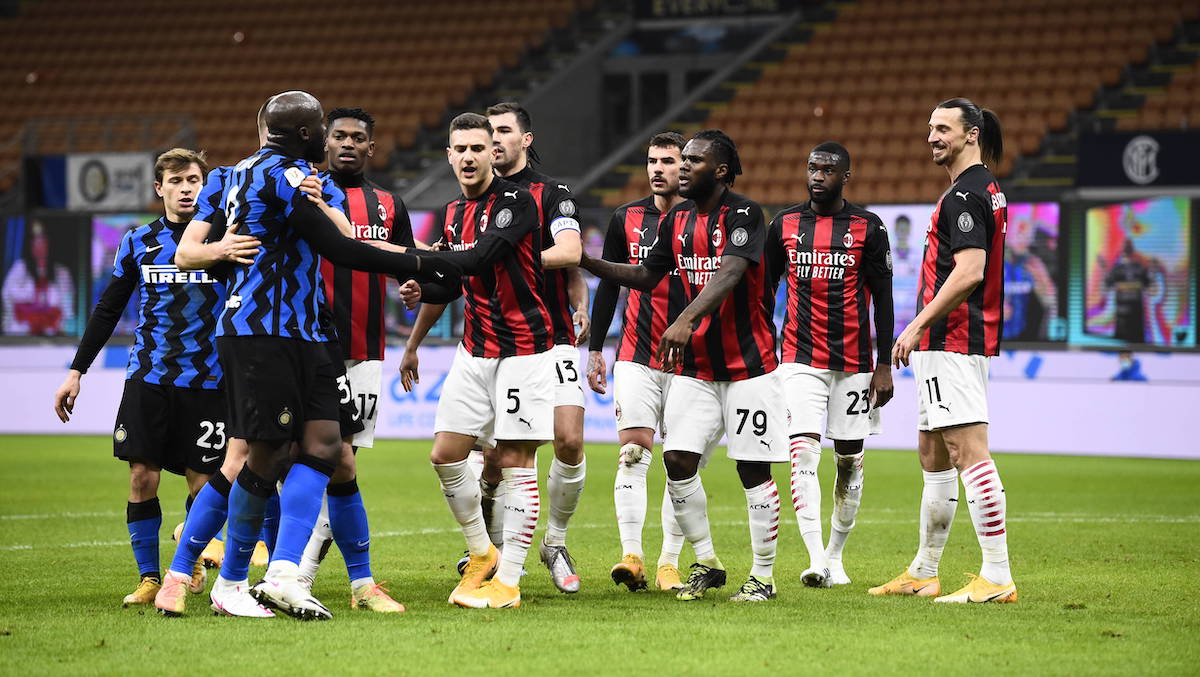 Ten-man AC Milan were knocked out of the Coppa Italia at the quarter-final stage by city rivals Inter after a dramatic encounter at San Siro.

Milan took the lead inside the first half as Zlatan Ibrahimovic finished neatly off the far post, but it all seemed to come crashing down when the Swede wrongly saw red for a second yellow card.

Inter were then given a very debatable penalty in the second half as Nicolo Barella threw himself to the floor, and Romelu Lukaku despatched it. The Belgian was lucky to stay on the field after he stuck his head into Ibrahimovic’s before the break and continued to pursue him down the tunnel.

Christian Eriksen’s late free-kick would be enough to win the game for the Nerazzurri, and once again it was a very debatable decision, but it sees them in the semi-finals where they will face either Juventus or SPAL.

Stefano Pioli made a number of changes to the starting XI from Saturday as Ciprian Tatarusanu, Diogo Dalot, Alessio Romagnoli, Alexis Saelemaekers and Brahim Diaz all came into the line-up.

It was Milan who had the first decent chance of the game as Theo Hernandez’s driving run ended with Ibrahimovic feeding Leao who dragged his shot narrowly wide of the left post from around 20 yards out.

The ‘home’ side then began to get their wing-backs into the game more and twice whipped in dangerous balls that had to be cleared by Kjaer in what was a fairly open start to the game considering the changes made by both sides.

Milan were inches away from taking the lead 13 minutes in when Leao crossed deep into the box and found the onrushing Ibrahimovic, who didn’t get a clean connection but ended up shouldering the ball just wide of the far post, narrowly evading a late run from Brahim Diaz.

There was a moment of confusion inside the box as Brahim Diaz blocked a free-kick in the wall and then booted his clearance at Alexis Sanchez’s back, which resulted somehow in the ball being directed on target but being caught by Tatarusanu.

Straight after the incident, Simon Kjaer came off injured and that allowed new signing Fikayo Tomori to make his debut for the club.

Lukaku was causing problems for Milan’s now reshuffled back line, and Tatarusanu was called into action to deny the Belgian with a strong save with his boot after he got separation from Romagnoli to shoot, and second later Romagnoli did well to block an effort from Inter’s number nine.

Despite the pressure from the Nerazzurri, it was Milan who took the lead just after the half hour mark and it was the man for the big occasion again as Ibrahimovic scored. The 39-year-old brought the second ball down after a free-kick wasn’t cleared, manufacturing some shooting distance from Kolarov and firing a low effort between his legs and in off the far post.

😌 Ibrahimovic nutmegs Kolarov and plants it in off the far post The man for the big occasion…pic.twitter.com/6a7R9VtvB3

Theo Hernandez was on hand to rescue Milan eight minutes before the break clearing an effort off the line as a cross was stood up to Alexis Sanchez at the far post.

There was a huge flashpoint just before the half-time interval as Ibrahimovic and Lukaku clashed heads and the Belgian was absolutely infuriated by whatever was said by his opposite number. It even forced Paolo Valeri to call an early end to the first half as Lukaku insisted on following Ibra around to shout expletives at him.

👊 This is what derbies are about…pic.twitter.com/E9QvLyPAJo

Inter made a change at the break as Hakimi came on in place of Darmian, with Tatarusanu forced into an early double save firstly from a Kolarov free-kick and then from the resulting corner as Sanchez nearly snuck one in at the near post.

Tomori was being given a baptism of fire by a now fired-up Lukaku, but the Englishman did superbly to block his effort from inside the box after Hakimi’s cut-back.

Just before the hour mark the referee made a huge call as Ibrahimovic was handed a second yellow card having been adjudged to have brought down Kolarov, his first having come during the half-time confrontation. Pioli made an instant change as Ante Rebic came on in place of Brahim Diaz.

Perisic’s last involvement for Inter came when he headed a Vidal cross onto the roof of the net from close range, and on came Lautaro Martinez in his place.

Valeri’s bad evening got even worse when he decided to award a penalty to Inter for what appeared to be incredibly negligible contact as Barella threw himself onto the ground when challenged by Leao. Lukaku took the responsibility, and was lucky to see his penalty cannon off the crossbar and in.

There was a moment of relief for Milan fans as Valeri actually went off with a thigh problem and was replaced by the fourth official.

Inter as expected with their numerical advantage began to get on top in the game, and Tatarusanu made an excellent low save to deny Hakimi who got a shot off inside the box.

With six minutes left on the clock Pioli made a double change as Rade Krunic and Samu Castillejo came on in place of Saelemaekers and Leao.

Tatarusanu’s inspired form continued as the Romanian made two absolutely fantastic saves, first of all to deny Lautaro who had been put through on goal but checked back to shoot, and secondly to deny a close-range effort from Lukaku with a superb reaction save.

It would be Inter who got the winner in the seventh minute of 10 added as Meite gave away a free-kick around 20 yards out, and Christian Eriksen stepped up to curl an effort over the wall and past a stranded Tatarusanu. Replays showed that it was a very contestable free-kick.