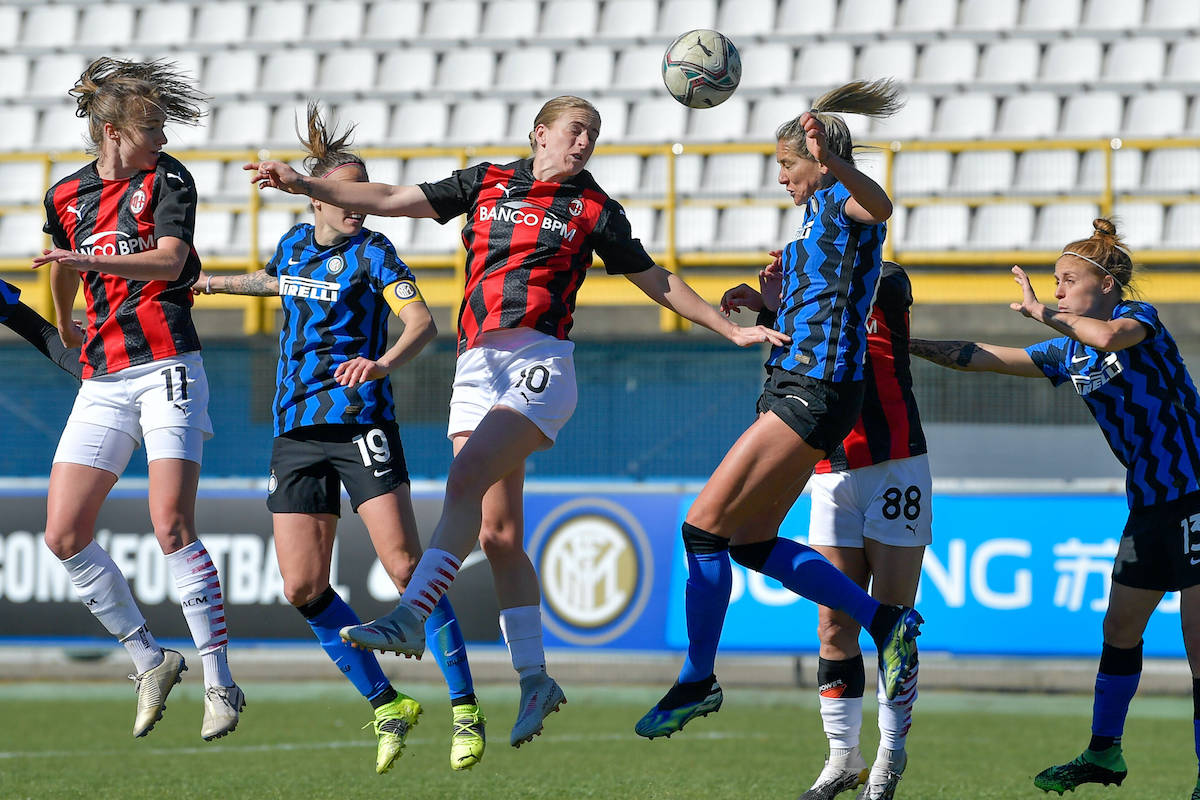 The AC Milan Women lost by a score of 2-1 against Inter last Sunday in the first leg of the Coppa Italia Femminile semi-final, marking the first time they lost the Derby della Madonnina as well.

What went wrong? We have an analysis of the game below…

As he had done in previous matches, coach Maurizio Ganz decided to switch formations during this game and have Milan line-up in a 4-3-1-2. The sudden change of formations happens after Ganz loses a match; one almost wonders if he does this out of panic.

Ganz also reverted to playing four at the back, and deploying
a number #10 behind the strikers again. The change of formation itself was not a problem. However, the lack of clear-cut instructions on the field, along with Ganz taking a more cautious approach to this game, did prove to be a hinderance.

Milan also took the field without starters Verónica Boquete, Giorgia Spinelli and Refiloe Jane, as all three were sidelined due to injuries. The absences of both Jane and Boquete were felt, as the midfield definitely missed both their steeliness and creativity. They also missed Vero’s leadership as well.

Inter, on the other hand, lined-up in their usual 4-3-3. In particular, the Nerazzurre relied on fullbacks Beatrice Merlo and Martina Brustia to contribute to their attack while snuffing out Milan’s build-up.

Inter also fielded an attacking trident consisting of Caroline Møller, Ilaria Mauro, and Gloria Marinelli. All three of them worked in tandem to probe Milan’s defense and to give them fits.

The real inspiration behind their play, however, was captain Lisa Alborghetti. The former Milan player was their talisman, whose leadership at the back kept Milan at bay while also inspiring her team to a win.

In the end, the Nerazzurre would emerge the victors of this match, thanks in large part to Alborghetti’s leadership.

The match itself got off to a pretty bad start for Milan. Things went awry in around the third minute as defender Laura Fusetti conceded a penalty after the ball accidentally hit her hand in the box.

The penalty was conceded while she was marking Caroline Møller. Inter’s talisman, Gloria Marinelli, would then step up to take the penalty. The initial shot was parried by Milan’s Mária Korenčiová, but Marinelli converted the rebound and put the home side ahead.

A few minutes later, Caroline Møller would double their advantage through a spectacular goal.

The second goal happened after the Milan defence failed to mark Møller properly. The fact that Laura Fusetti fell down while tracking her is a testament to this. Inter, like Juve before them, capitalised on Milan’s mistakes and made them pay for it.

Milan’s midfield, unfortunately, didn’t fare much better either. Both Dominika Čonč and Christy Grimshaw were often caught off-guard, and both made bad decisions while in possession, and chose to make long passes rather than the short ones that would build-up play.

One could also say that the weather played a part in hampering this match, the best example being when Korenčiová’s pass to Fusetti was shot into the wind. It thus weakened the force of her shot and did not reach Fusetti in time, and it’s part of the reason why she conceded a penalty.

The attacking duo of Valentina Giacinti and Natasha Dowie seem to be working better together and benefitting from each other’s teamwork, even if they sometimes don’t set goals up for each other.

However, when the going gets tough, they both transform into a pair of voracious, apex predators, who then try to win the games on their own. This ‘go at it alone’ approach is detrimental to the team’s chemistry on the pitch; perhaps they do this because they don’t trust their team-mates to score the game-winning goals for them (which is a discussion for another time).

Maurizio Ganz’s pragmatism played a role in this defeat too; the coach does have players on the bench that could make an impact in the late stages of a game. And yet, he is sometimes reluctant to use them.

The fact he substituted out a defender for defensive midfielder – Claudia Mauri – is a testament to this, as it was almost a like-for-like sub. The team needed a goal to win, and yet he chose to play it safe.

Credit must also be given to Inter for the way they played. In particular, veteran forward Mauri gave Milan’s defence all kinds of trouble, while captain Alborghetti held the line at the back. Goalkeeper Astrid Gilardi also deserves a mention, as she pulled off a few spectacular saves.

And for the first time in their history, the Inter Milan Women have won an instalment of the Derby della Madonnina.

The one, true standout for this match was Yui Hasegawa. She usually plays on the left, either as a midfielder, or a left winger. However, she was deployed in a more central role during this match, and she still shined in her position.

Whether it was her on the ball runs, her close control or her pinpoint passes, Hasegawa was the true MVP for Milan during this game.

Once again, captain Valentina Giacinti came in clutch for Milan. The forward scored a vital away goal for the Rossonere. They’ll need the advantage if they are to turn things around at the Vismara on April 23rd.

And yet, the Rossonere still couldn’t make the most of this, despite the advantages that were given to them.

Once again, the team needs to be more clinical in front of goal and learn to take advantage of the opportunities given to them. When they finally do so, they’ll be able to avoid defeats like this. 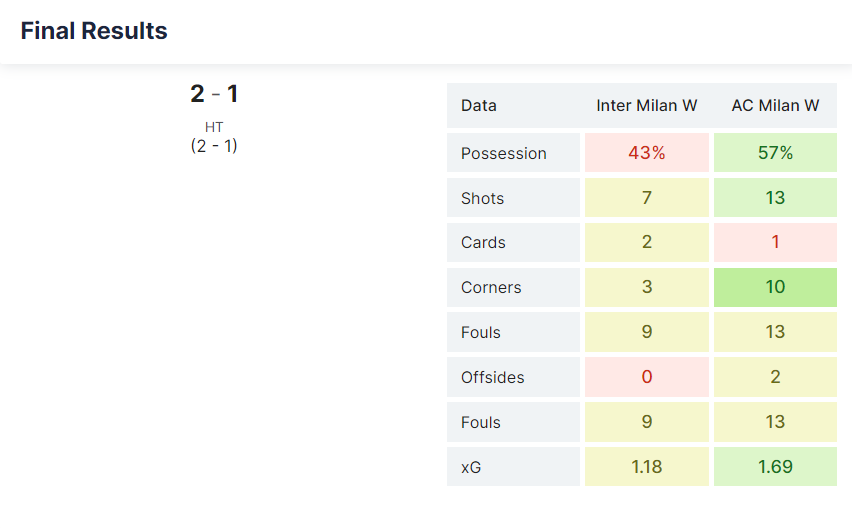 This was an embarrassing and avoidable defeat by Milan. The fact that it came off of a 4-0 loss from Juve makes the pain even worse.

At times, the team look devoid of any ideas and look like they’re sent out onto the pitch without any clear-cut instructions. The sudden change of formations after a loss doesn’t help too, as players need time to adapt to these roles.

Questions will be asked of the team, as one wonders if there’s something going on with them that has led them to lose two games in a row. Whether the answer to that question is psychological or if it’s something else remains yet to be seen.

The coaching staff should come under scrutiny as well. Ganz’s tactics have been exposed these past two matches, and the spotlight will only get brighter with each subsequent mistake.

The team needs to get it together and turn things around soon. There is no more time to waste as each subsequent loss puts them in peril and will make it difficult to reach their seasonal objectives.

The two silver linings in this dark cloud are: 1) This is a Coppa Italia match, so this doesn’t affect their league standing, and 2) This match was also the first one in a two-legged fixture, and the Rossonere will have the chance to turn it around in late April.

The hope is that they’ll get it together by then and win this tie.

Milan will play Empoli at the Vismara this Sunday. The match will take place at 13:30 CET (04:30 PST / 07:30 EST). The match is a must win for Milan if they are to qualify for next season’s Champions League.

They must learn from their past mistakes and turn it around. Otherwise, it could lead to them dropping points and losing their second place standing. We’ll see if they’ve learned their lessons by this Sunday.