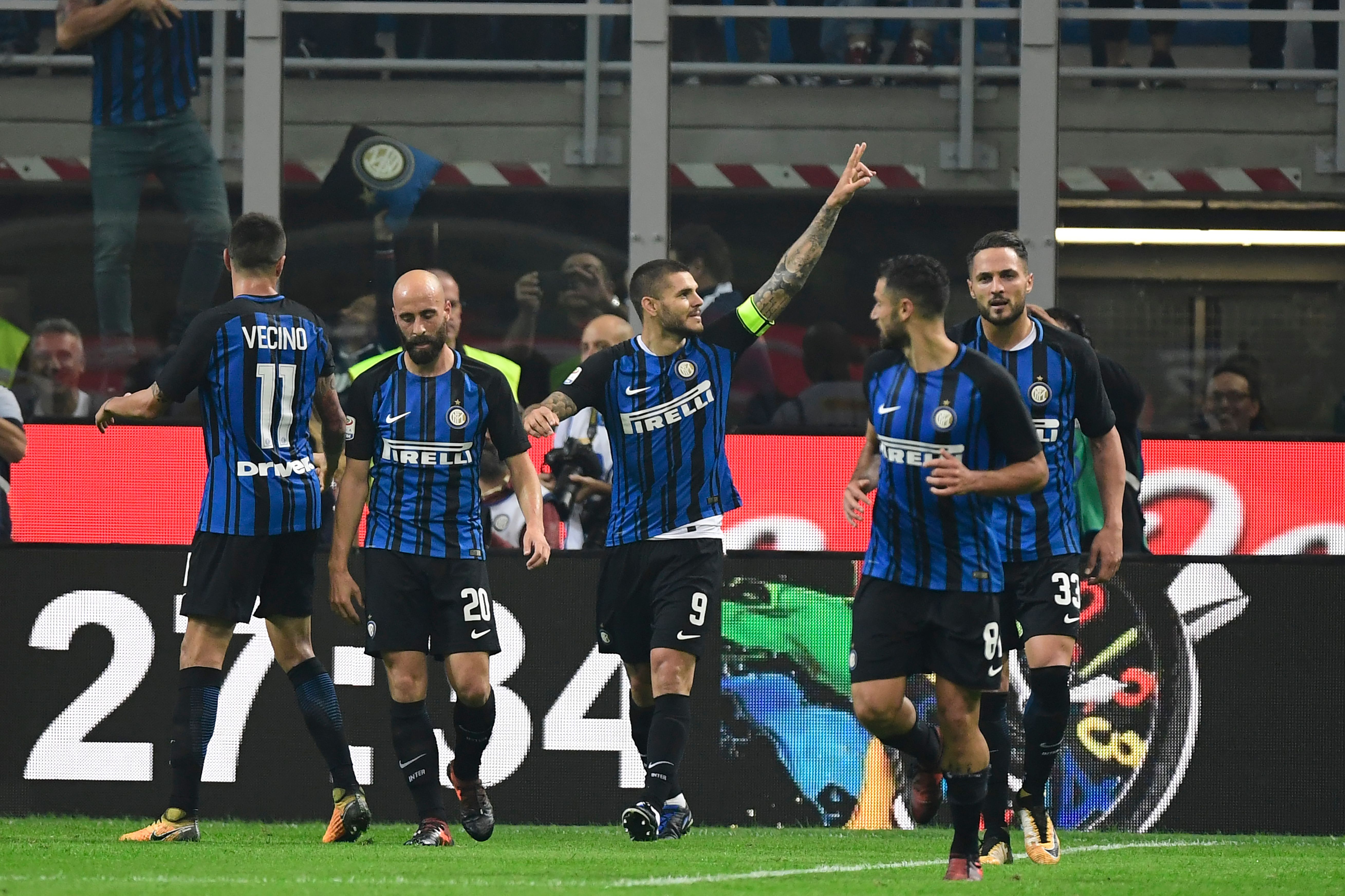 Internazionale stole the Derby spoils in the most dramatic fashion, scoring in the last minute in a 3-2 win at San Siro on Sunday night.

Mauro Icardi netted a hat-trick for Luciano Spalletti’s side, who opened up a ten point gap on Milan in the process.

Vincenzo Montella’s men twice levelled the game through Suso and Giacomo Bonaventura and deserved more for their efforts, but remain in tenth place.

The Nerazzurri started the game very much on the front foot and were inches away from taking a 13th minute lead when Candreva hit the bar with a shot from the edge of the box.

An exchange of yellow cards then follow in what was a fiercely contested opening 45 minute at San Siro; referee Paolo Tagliavento not willing to let challenges go unpunished.

Two minutes before the break Inter provided the first moment of quality. Candreva found space on the right flank and delivered a peached of a low cross, with Icardi on hand to provide a deft flick at the near post the snuck in the far post.

Milan’s best chance of the first half came two minutes before the break; Fabio Borini being fed by Franck Kessie with the ex-Sunderland man firing a low drive that Samir Handanovic stopped well.

The Rossoneri brought Patrick Cutrone on in place of Kessie and started the second half well. Montella’s man thought they had levelled when Mateo Musacchio put home a rebound, only for the linesman to rule it out for offside.

Suso then tried an effort from 35 yards which was tipped over by Handanovic before Borini tested him again with a low effort after the corner.

Cutrone then had his first chance in the 54th minute as he flicked a Ricardo Rodriguez cross into the side netting at the near post.

📺 WATCH: Suso's curling effort makes it 1-1 in the #DerbyMilano!

The Rossoneri were revitalised and went close again through Bonaventura who span well inside the box and fired a low shot that was well saved.

However, parity was to be short lived as Icardi made Milan pay again for sloppy defending. The former Sampdoria man was found inside the area by a ball from Ivan Perisic and shinned his effort inside the far post to make it 2-1.

📺 WATCH: Giacomo Bonaventura makes it 2-2 in the #DerbyMilano!

With ten minutes left it was level once again however as a cross from Borini found Bonaventura at the far post who tucked home with a neat sliding finish after Handanovic failed to save.

There was to be one more cruel twist though as referee Tagliavento awarded a 90th minute penalty; Rodriguez hauling down his man at the far post, Icardi despatching the spot kick to give Inter the three points.