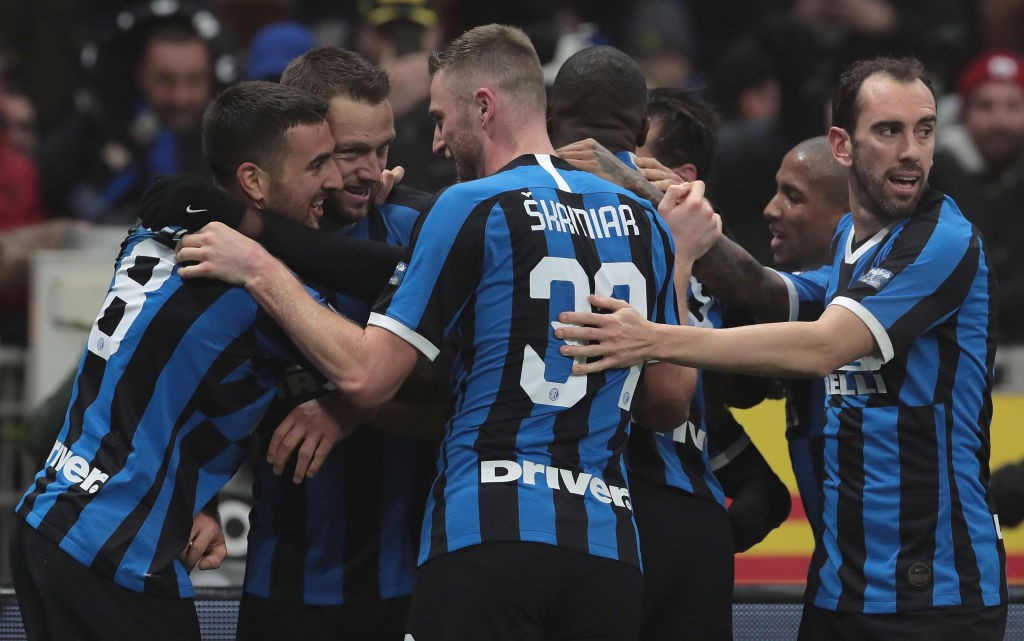 Pioli decided to change formation slightly ahead of the game, lining up with a 4-4-1-1 to try and assist the midfield battle, with Ante Rebic on the left and Hakan Calhanoglu in behind Zlatan Ibrahimovic.

The Rossoneri began the game on the front foot and had several half chances inside the opening stages. Ibrahimovic fired a volley wide, while Rebic and Castillejo both saw shots crucially blocked.

Milan were inches away from taking what would have been a deserved lead in the ninth minute when Nicolo Barella lost the ball, allowing Calhanoglu to burst forward and fire a shot off the far left post.

Inter offered a warning as to the quality they have from set pieces, whipping in a dangerous corner that Skriniar couldn’t stab home from inside the six-yard box.

Diego Godin was the next to give Milan a scare as he glanced a header just wide of the far post from Alexis Sanchez’s corner.

The home side had another big chance to break the deadlock midway through the first half when Lukaku was allowed to burst into the box and pull the ball back to Matias Vecino, who saw his first time shot well saved by the legs of Donnarumma.

Ibrahimovic began to orchestrate all of Milan’s good play, and could have perhaps pulled the trigger himself when a neat one-two with Calhanoglu found the Swede in behind, but ultimately his pull-back was well cut out.

Five minutes before the break, Milan took the lead. A perfect cross from Castillejo was met by the head of Ibrahimovic, and Padelli was caught in no man’s land allowing Rebic to jab the ball home at the far post.

With what was the last action of the first half, their lead was doubled rather predictably through Ibrahimovic. A corner travelled all the way to the far post where the Swede had the easy job of heading home unmarked back across goal.

The pressure was on the Nerazzurri to start the second half on the front foot, and they did exactly that by scoring six minutes in. Marcelo Brozovic was the man who got the goal, carefully placing a volley into the far corner past an outstretched Donnarumma.

The pressure was on the Nerazzurri to start the second half on the front foot, and they did exactly that by scoring six minutes in. Marcelo Brozovic was the man who got the goal, carefully placing a volley into the far corner past an outstretched Donnarumma.

Moments later, Inter made it 2-2. A through ball found Alexis Sanchez in space, and his cross was blocked into the path of Matias Vecino, who fired in.

The game then became scrappy as the two sides exchanged cards, with Inter’s assistant coach even being sent off for dissent.

Ibrahimovic had a chance to work Padelli with a free kick from 30 yards, though his effort floated wide of the right post.

The home side then had their own chance as Lukaku curled an effort wide from inside the area, but from the resulting corner Inter went ahead through De Vrij. The Dutchman found space to angle his header past Donnarumma inside the far post.

Pioli made his first change with just over 10 minutes left as Rafael Leao came on for Samu Castillejo, the Spaniard visibly frustrated about being withdrawn.

Moments later, substitute Christian Eriksen rattled the underside of the bar with a knuckleball free kick from around 35 yards.

Lucas Paqueta then entered in place of Franck Kessie as Pioli tried to force the issue and find a third goal. Giacomo Bonaventura came on for Ante Rebic in the final change.

Inter had a big chance to wrap up the three points with two minutes left as Barella ran through on goal after Lukaku’s flick on, but Donnarumma would save from close range.

Heading into the final seconds, Ibrahimovic rose above Skriniar to head onto the post from a teasing cross, though it may have been given as a foul anyway had the ball gone in.

Inter had a big chance to wrap up the three points with two minutes left as Barella ran through on goal after Lukaku’s flick on, but Donnarumma would save from close range.

However, they would get their fourth goal in the third minute of added time as a cross deflected and looped into the air where Lukaku was waiting to head home.