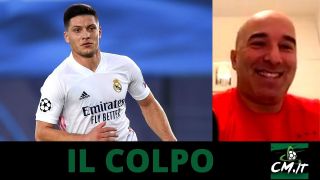 Cenolli was asked by Calciomercato.it to explain Jovic’s situation, and he made a couple of interesting revelations about Milan’s pursuit.

“Milan were talking to take Jovic in the summer, then things didn’t happen because Real Madrid wanted to give the player another chance,” he said.

“Things went as they went, Zidane didn’t give the Serbian a chance. Now I think it will happen, Jovic will become a new Rossoneri player with the formula of a loan with option to buy.

“Real Madrid want to recover part of the money spent to buy him. Things didn’t work out, so I think the option will be set at an affordable amount for Milan. The operation is feasible, Ramadani knows the Milanese environment well since he also looks after Rebic’s interests. Jovic can do well in the Rossoneri with his characteristics.”