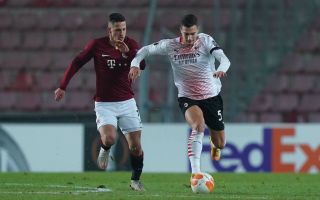 Loanee Diogo Dalot put in yet another solid performance during Thursday night’s 1-0 win over Sparta Praha.

The Manchester United man started the game at left-back just as he did in the first group fixture against Sparta, and he racked up an assist just as he did that night, finding Hauge with a pass before the Norwegian danced inside the box and scored.

The media rated his performance as follows…

Tuttosport gave him a 6.5 out of 10 in their player ratings (via PianetaMilan) with the following comments: “The pass to Hauge is one of those that cause fear, because they cut through like a knife through butter.”

La Gazzetta dello Sport gave Dalot a 6.5 too, with the comment: “In some moments he seemed like Theo Hernández. Bold runs. Excellent understanding with Hauge on the wing. A couple of moments of discomfort covering – the one on Karlsson could have cost dearly.”

He was awarded a score of 6.5 out of 10 by us: “The Man Utd loanee impressed this evening with an asserting performance in both phases of the game. Made no mistake at the back and also contributed a lot in attack, including the assist to Hauge.”

MilanNews gave him a 6.5 too: “With Hauge he created a nice left side, which is the one on which Milan causes most danger because Diogo attacks the internal corridor leaving JP in isolation and one on one with the opponent.”