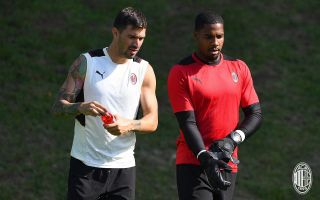 AC Milan have tabled a renewal offer to club captain Alessio Romagnoli in a bid to get him to extend his stay, a journalist has claimed.

The Italian defender has a contract which is set to expire at the end of the current season and there is nothing to suggest a renewal is imminent nor that any progress in talks is being made. He has been at the club since 2015 and it is only in 2021 that he has seen his starting spot taken by Fikayo Tomori and Simon Kjaer.

According to Alessandro Jacobone on Twitter, Romagnoli enjoys the esteem of the management to the extent that he has been offered a four-year extension until 2026, but he would have to make a sacrifice in order to stay.

That is because Maldini and Massara are offering €2.8-3m net per season to Romagnoli to try and obtain his renewal, and it remains to be seen if the offer will be accepted. If he were to leave on a free, Milan would obviously have to spend money to replace their captain.

READ MORE: Milan expected to be buyers in January – duo targeted to reinforce the attack