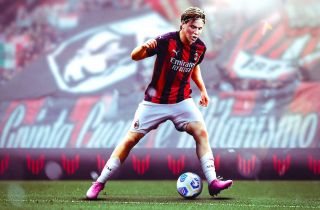 In 2018, Jens Petter Hauge was sent on loan to the Norweigan second-tier because the faith that he was going to make it wasn’t there.

After Jens Petter Hauge’s success at the San Siro in the Rossoneri’s Europa League-qualifier against Bodø/Glimt, where the 20-year-old scored one goal and set up another, Milan acted quickly to secure the services of the young Norwegian left-winger.

Within a week he had become Milan player and the third Norwegian in club history, in a deal which is rumoured to be in the region of €4million.

Jens Petter Hauge is a Bodø native, a small town in the most northern parts of Norway. Bodø is a town with approximately 50,000 inhabitants and is not well known for its production of footballers, something his father told us in our recent exclusive.

Started his career at Bodø/Glimt and progressed through the academy ranks until he made his senior debut in April 2016, aged 16, where he immediately scored a hat-trick against IF Fløya. The following season, Hauge established himself as a regular starter, scoring two goals and adding 13 assists as Bodø/Glimt won the Norwegian second tier.

But after that successful season, Hauge lost his rank in the senior team. He was loaned to Aalesund, in the second division at the time, where he only made six appearances and scored no goals.

Hauge didn’t let it get him down. When he returned from loan, he made it his mission to take back his starting spot – and he did it in an incredible way. He scored seven goals and added two assists in his rookie season in the Norwegian top flight – the Eliteserien – at only 19-years-old.

So, when the new season of Eliteserien started he had his starting spot, and he went into a new gear. Before he signed with Milan on October 1st, he had scored 14 goals and made ten assists in 18 league games. He had also scored three goals and made two assists in Bodø’s Europa League-qualifiers, one goal and one assist as we know at the San Siro. His performances ultimately gave him his first call-up to the Norwegian national team and a prestigious move to Milan.

Hauge is a left-winger who loves to have the ball. He often drops deep to receive it and advance up the pitch with it at his feet. The 20-year-old is capable of playing RW, AM, or even ST as well, but what really gives him an edge on the left-wing is his unpredictability.

Whilst facing his defender, Hauge is very skilled at either cutting inside to shoot or make a final pass, or advancing towards the byline and deliver a cross into the box with his left foot. This makes him very hard to control, which could be seen by how he had Davide Calabria on strings at San Siro.

Growing up, Hauge played a great amount of futsal in addition to his footballing career. He credits that as the reason to why he’s so good at navigating small spaces, making his man 1v1 and his overall technique and ball-moving abilities.

What truly makes him special is that combined with the fact that Hauge is a very confident player, especially for his age. When he’s on the ball he oozes confidence and rarely makes mistakes due to being stressed or anxious.

Hauge has been described as a “true winner” because he never gives up or doubts in his ability on the pitch. According to Norweigan football expert, Jonas Giæver, that is an influence he has picked up from his time in the Norwegian youth national teams with Erling Braut Haaland and Leo Skiri Østigård.

What is important to note, though, is that Hauge has played with a whole lot of freedom at Bodø/Glimt. That’s a commodity he won’t have as much of at Milan, so how will that affect his game? It’s certainly something he must get used to.

It’s very hard to make a fair statistical comparison with any of Milan’s current wingers, as Samu Castillejo and Brahim Diaz come from La Liga, Ante Rebic comes from Bundesliga and is an experienced player, so the fairest and accurate comparison would be Alexis Saelemaekers – who’s also a player of the 1999 class.

What has to be taken into consideration, though, is that Bodø/Glimt is a very dominant side in Eliteserien. Anderlecht was not as dominant as Bodø in the Belgian league during Saelemaekers’ years there.

That being said, in a comparison between Hauge and Saelemaekers before their Milan careers, there is only one winner and that’s Hauge. Both played at either right-wing or left-wing at their previous clubs and produced 14 goals and 10 assists, whilst the other produced two goals and two assists in only two games less. Other than that, it’s hard to compare more, as the Norwegian league doesn’t record stats in the same way the Belgian Jupiler League.

Jens Petter Hauge for €4m is an absolute no-brainer. He is one of the most talented players from Norway and Scandinavia, and seen to the plethora of talent in or from Scandinavia at the moment, that speaks volumes.

Jonas Giæver, who’s seen the likes of Erling Haaland, Martin Ødegaard, Sander Berge, Alexander Isak, and more come through the Scandinavian ranks said in SempreMilan’s exclusive interview with him that he thinks Hauge has the potential to become a player of top quality in Europe in his position.

Furthermore, the price tag is incredibly affordable for a club of Milan’s status. So, it’s hard to find a transfer Milan has made in a long time that’s less ‘low risk/high reward’ than the one of Jens Petter Hauge.

If everything clicks for the young Norwegian, he can become a true difference-maker for the Rossoneri.