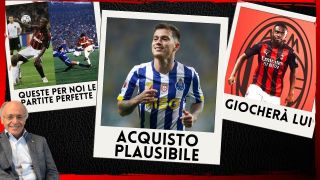 Journalist Carlo Pellegatti has backed up reports that AC Milan are interested in signing Porto playmaker Otavio on a free transfer.

Pellegatti spoke on his YouTube channel (via MilanNews) about the situation surrounding Otavio and conirmed that he is a ‘plausible’ addition in view of next season, a player that has been followed ‘well’ and is one that ‘interests Milan’. He plays on the left wing at the moment in Porto’s 4-4-2 but the club have him in mind as a deputy to Hakan Calhanoglu if he stays.

Pellegatti recalls how Otavio has drawn comparisons with his compatriot Oscar, adding that he is an ‘international-calibre player available at no cost’ as he ‘will not renew with Porto’. He is instead looking for a new adventure, one that will see him on the big stage.