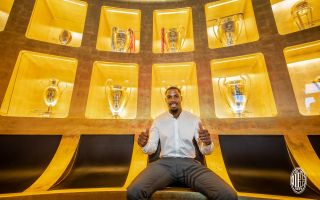 Journalist Valentin Pauluzzi has sung the praises of new AC Milan signing Mike Maignan after he completed his move to join the Rossoneri.

The Rossoneri made a statement signing yesterday when they confirmed the acquisition of Maignan as a replacement for Gianluigi Donnarumma, even if most people would have had money on the Italy international renewing with his supposed boyhood club, especially after securing a Champions League finish.

Pauluzzi – the Italian correspondent for France Football and L’Equipe – spoke exclusively to MilanNews about Maignan, with the questions and answers transcribed below.

The news of Maignan’s arrival in Milan on Monday evening was a great surprise. How was it received in France, especially by Lille fans?

“It is a somewhat particular situation for the Lille fans, also because Galtier will probably not stay. The team’s plans are clear and even the championship victory was a small sporting miracle. It is therefore right that the great protagonists of the team like Maignan aspire to other stages. Then clearly leaving Lille to join Milan and play the Champions League with the Rossoneri is a coherent choice. His departure then, unlike that of Donnarumma, did not come to an end but a year earlier in order to let Lille monetise.”

The figures speak of a 13 million plus bonuses. Can it be defined a great operation by Paolo Maldini?

“It’s a fair price, not that low because he only had one year on his contract left. In perspective, however, it can be a great investment. The only doubt I have, looking at the historical precedents, is that related to the role because French football produces champions after champions in other roles, rarely in goal, In Italy only Frey has lived up to expectations. However, this does not mean anything because Maignan has the qualities to do well and at Milan he will find other French who can help him in the inclusion such as Kalulu and Theo Hernandez.”

What kind of goalkeeper is he? Does he have a modern game or he more old school?

“He has always been convinced that he could have made a career in the world of football even in another role precisely because he is very technical. He is very good with the ball and technically he is certainly a modern goalkeeper capable of playing with his feet. This was the season of his maturity. He was practically perfect and made very little mistakes, maybe just a mistake. So this is the right time for him to take flight.”

What are his strengths?

“He is a very determined player who has clear ideas about what he wants. He is very strong in positioning on the goal line, he has great ability to make the right choices especially in low exits. He knows how to occupy the spaces in the goal very well and is a great defensive leader.”

Maignan is described as a boy with a strong personality. Can you tell us a little about his story and his character?

“I think he’s a goalkeeper with more personality than Donnarumma. I know his history and his character and I can say that he is a boy with a great personality. He grew up in difficult neighbourhoods in Paris. As a child he dreamed of being a bandit because he saw the boys of the neighbourhood running around with money and big cars but he was still too young to understand that it was all the result of illegality.

“Then he approached football and realised that this was his way. In the youth sector of the PSG he had some clashes with Rabiot, another nice temper but then they became great friends. He is a demanding boy of character and has never met his father, an aspect that certainly changes the personality of a young boy like him.”

He is currently the second goalkeeper in France. With his arrival at Milan and with his qualities, does he have the possibility of becoming the starter of the national team?

“Lloris is the captain of France and is about to turn 34 while the third goalkeeper is Mandanda. Maignan is therefore the only young goalkeeper and does not have great competition in this sense, then for the qualities he has he can certainly become the future goalkeeper of the French national team. He could play a few games in preparation for the European Championship and see him at work in some friendly matches.”