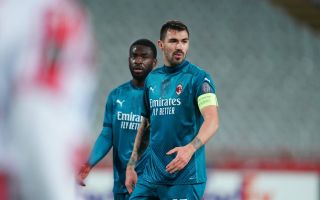 Journalist harshly suggests Romagnoli’s growth ‘stopped when he was 21’

Alessio Romagnoli received some criticism after his performance against Red Star Belgrade on Thursday, at fault for a handball with a sloppy handball. Certainly, there have been some doubts about the captain.

The defender remains an important player for Milan, having been the captain for quite some time now, but he hasn’t progressed the way made had hoped. And with competition increasing in his role, his cemented starting spot has been questioned.

During the game against Red Star, Mediaset and Calciomercato journalist Dario Donato shared his thoughts on Romagnoli and his growth in the last few years. Perhaps harshly, he wrote that the defender hasn’t improved in the last five years.

“Alessio Romagnoli’s problem is that at 21 he was exactly the same as today. That is, his growth and improvement process has stopped. He is a good player, but not the one Milan made a big investment in,” he stated.

Romagnoli is expected to play from start against Inter tomorrow and having been criticised for his performances in big games, it will be an important test for him. Do you agree with the journalist? Or are the doubts unnecessary? Let us know below.

READ MORE – Pioli provides reassuring update on Bennacer: “He didn’t have a relapse