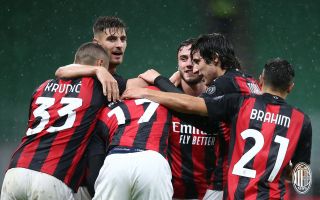 AC Milan can win the Scudetto this season because of five different factors that are at play, according to one journalist.

In his column for today’s edition of La Gazzetta dello Sport (via MilanNews), Alberto Cerruti spoke about Milan and highlighted five reasons why fans can dream that this may be the season to end what would be a 10-year wait for the league title.

The first reason is obviously Zlatan Ibrahimovic. He keeps coming up with match-winning contributions such as his brace in the derby and the overhead kick to beat Udinese. The Swede is also a coach on the pitch and a motivator off it, a leader capable of raising the level of his team-mates.

The second reason is the numbers so far. Milan are the only team that have scored at least two goals in every league games, as well as being the one that has won the most matches (five out of six) extending the run of unbeaten games to 24, which began last season.

The third reason is psychological, because Milan did not set out this season to win the Scudetto like Juventus and Inter. The goal was, and remains, to finish at least fourth to return to the Champions League. Without the pressure, a possible slowdown in form would not equal failure.

The fourth reason is linked to the difficulties that competitors are having so far this season. Inter are 5 points behind already and have had bad results (the derby and scraping a draw at home to Parma) while Roma and Napoli are the same. Juventus and Atalanta are minus 4, but have also had a difficult opening.

The final reason, reason number five, is parallel with the number of substitutions that are allowed this season, allowing Milan to use their depth which will be hugely beneficial to their high-intensity playing style.