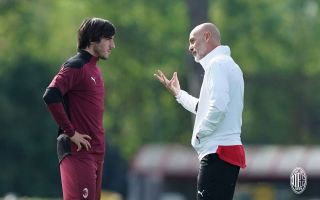 Sandro Tonali has been praised for his good-will ‘gesture’ to make sure that he stays at his boyhood club AC Milan by well-known journalist Fabrizio Biasin.

Tonali is set to finally be announced as a permanent transfer by Milan, after lengthy negotiations with Brescia. In September 2020, he joined the Rossoneri on a season-long loan deal for €10 million with an option to buy for €15m.

In addition to the €10m loan fee paid last year, the Rossoneri will pay €7m in cash to Brescia for his permanent transfer, as per MilanNews and other sources. In order to facilitate his transfer, the Italy U21 international accepted a pay cut by about half a million euros per year – something that has turned heads in a summer where Donnarumma and Calhanoglu left for the money.

Renowned Italian journalist Fabrizio Biasin, in an interview with TuttoMercatoWeb (via MilanLive), said: “Tonali has accepted the cut imposed by Milan and renounces a salary of €400-500,000.

“Many say ‘he had no alternative’ and maybe that’s true. But in a senseless world like that of football, where, rather than losing a euro, you turn to the courts, this thing deserves at least a report.”

Tonali, who has been a lifelong Milan fan and largely likened to the legendary Andrea Pirlo – both in terms of appearance and playing style – has proved to be highly determined to stay put with the Rossoneri.

READ MORE: Why Lucas Paqueta didn’t succeed at Milan and why he has thrived so much since