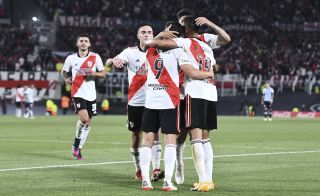 Julian Alvarez signed off the league season in the best possible way as he netted a brace for River Plate, and now the speculation regarding his future will be ramped up.

Calciomercato.com reports that last night’s game could have been his last for River Plate given all the rumours about interest from Europe and also given the fact his contract is expiring in six months. He scored the first two goals in the 4-0 victory over Colon in the Argentine Super Cup and also had a hand in the third and fourth goals.

Alvarez could leave on a free transfer in June and Inter are keen on replicating the signing of Lautaro Martinez, but without any financial outlay. However, Milan and Juve are keen and are ready to make a move in January but it remains difficult because some Spanish and German clubs are ready to invest significant amounts to convince River to sell.

The 21-year-old striker is ready for the big jump and would prefer an immediate farewell that would also generate some revenue for River.