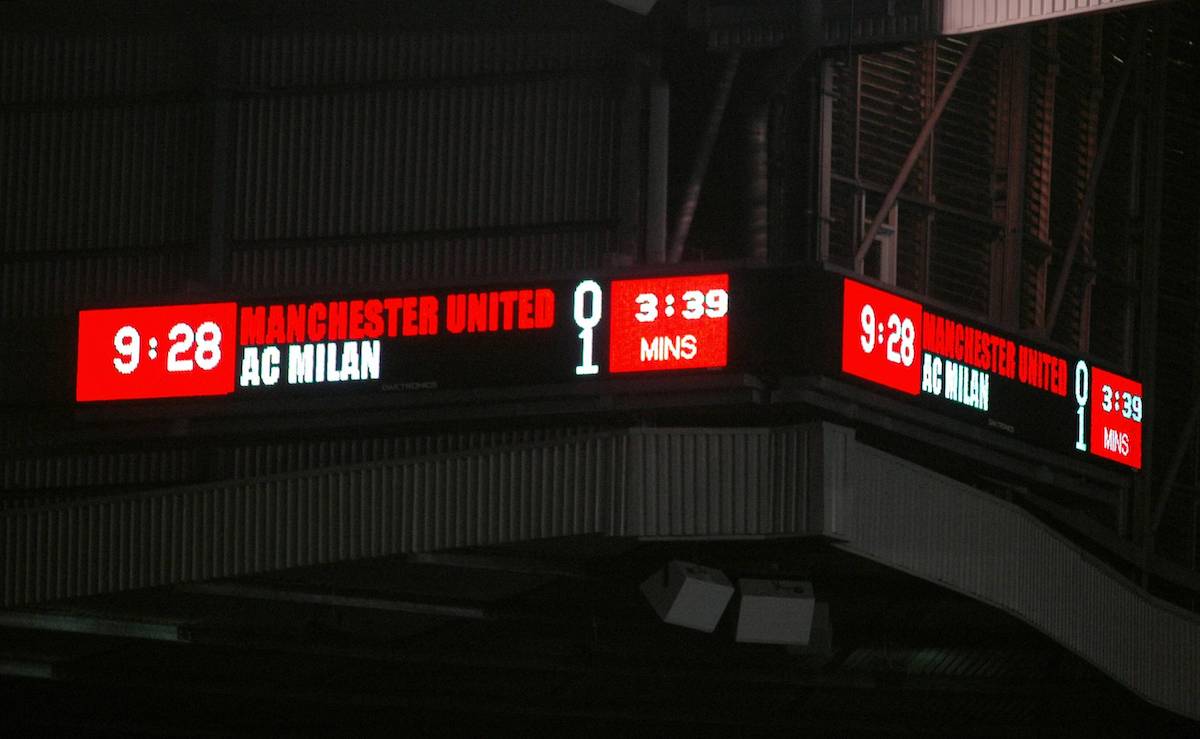 Kaka the catalyst and Rooney’s redemption: The best games between Man Utd and Milan at Old Trafford

The UEFA Europa League will witness two usual Champions League heavyweights in Manchester United and AC Milan facing against each other for the first time in the competition’s history.

This will be the 11th match between the two teams, with all previous ten meetings coming in the UEFA Champions League/European Cup. It will be only the sixth time in history Milan will be visiting the Theatre of Dreams.

The last time Milan step foot in Old Trafford, Wayne Rooney and co. put up an attacking show to treat the 75,000 odd spectators present in the stadium to a 4-0 thumping – still the joint-heaviest defeat for the Rossoneri in major European competitions.

This time around, however, there will be nobody there to relish in what is touted to be an exciting clash that may well decide the season for both the teams. We look at three of the most memorable matches in recent history against the Red Devils at Old Trafford…

In a European season that would eventually be remembered for the heartbreak in arguably the greatest Champions League final in history, Milan’s continental run truly began in Manchester, although the Rossoneri topped Group F ahead of Barcelona who went on to face and lose to Chelsea.

Both the teams entered the tie full of confidence – Manchester United on the back of five wins, dispatching the likes of blood-rivals Liverpool, Arsenal and city rivals Manchester City. Milan themselves were on a four match unbeaten run on the top of Serie A.

Sir Alex Ferguson’s relatively conservative 4-5-1 formation was put to test against Carlo Ancelotti’s creative 4-3-2-1 that looked to make the most of Andrea Pirlo effectively functioning as a deep-lying playmaker behind two trequartistas in the form of Kaka and Rui Costa, with Hernan Crespo as the poacher upfront.

The Rossoneri kept the hosts on the edge with relentless attacks that only bore fruit in second half. Although Cristiano Ronaldo, Ryan Giggs and Wayne Rooney looked to break on the counter, Alessandro Nesta and Paolo Maldini displayed their defensive prowess with utmost clarity.

In the end, it was Clarence Seedorf’s vicious shot that forced United goalkeeper Roy Carroll into an error. Argentine striker Hernan Crespo found himself in the right spot to tap in from close range. The Argentine’s 78th minute goal was huge in the context of the tie, as Milan would win 1-0 at home and progress.

✅ #ACMilan secured their first ever win against an English side on English soil, beating Manchester United 1-0 in the first leg of their #UCL Round of 16 tie at Old Trafford. Hernan Crespo got the goal after Carroll's blunder.pic.twitter.com/Gw5dRSga9H

An Old Trafford classic that will forever be remembered for Wayne Rooney breaking Rossoneri hearts in the final minute and as the match that put Ricardo Kaka on the pedestal of European glory.

Two years on from the famous 1-0 victory at Old Trafford, Ancelotti deployed a similar deadly line up in a 4-4-1-1 shape. Sir Alex’s side were comparatively more mature than the last outing in Manchester. He opted for an attacking 4-3-3 formation with a front line that would give jitters to any defence in the world – with Ryan Giggs, Wayne Rooney and Cristiano Ronaldo all playing their part.

Edwin Van Der Sar and Dida once again were the chosen guardians between the posts in a match that unleashed an attacking display that would make standing spectators of the best of goalkeepers such as themselves.

It all began with a six-yard mishap that put Milan 1-0 behind within six minutes, thanks to a Ronaldo header. But, the rest of the half belonged to one man. In what could be touted as one of Champions League’s best performances over two legs, Kaka put in an absolutely thrilling display, scoring a brace and letting fly shot upon shot on the Dutch shot-stopper.

His 37th minute second-goal was one for the ages. Dida’s long ball rolled into uncharted territory within the United half. Exploiting the open space ahead, Kaka’s first touch headed the ball past Darren Fletcher, before lobbing himself over Heinze.

What came next, was a moment of sheer spontaneity and creativity as he instinctively kissed the ball between onrushing defenders Gabriel Heinze and Patrick Evra, who collided in pure comedic manner. As a result, Kaka found himself effectively one-on-one with Van Der Sar and finessed the ball in an ice-cool manner. An eerie silence dawned upon the Theatre of Dreams. 2-1 aside from gasps of awe.

💬 “Here’s Kaka. He’s seen off Fletcher; he’s seen off Heinze, he’s still going… It’s wonderful from Kaka. Absolutely magical. He played them on his own there, and he beat them all.”

However, it was the hosts who got the upper hand going into the second semi-final leg at San Siro. Wayne Rooney was the star in the second half. His first came from close range as he slotted in a half-stopped shot from Dida, on the back of an instinctive lob ball from Scholes.

The Englishman then lashed in a thunderous effort in the 90th minute past Dida after Giggs’ accurate pass picked him out. The match belonged to two men, but the tie belonged to one. The Rossoneri comfortably brushed aside United in Milan – thanks to a Kaka master class, once again.

Old Trafford once again witnessed a red-hot Rooney stealing the show against the Italian giants. It is no wonder the English forward remains the highest scoring player in the tie between the two juggernauts.

It was a clash in Manchester that will be remembered for two aspects: the home side being amazingly relentless in attack and David Beckham making a rapturous return to his boyhood club. More of the former, in fact.

👏 David Beckham gets a standing ovation from the crowd upon his return to Old Trafford in the #UCL with #ACMilan. pic.twitter.com/Vo2yIqJQKI

Manchester United entered the clash in high-spirits, having won the first leg 3-2 at San Siro. It was the Rooney show once again – the man responsible for repeating his two goal demolition of the Rossoneri at the San Siro on home territory.

Thirteen minutes is all it took for United’s main threat to open the scoring as he headed Gary Neville’s cross past goalkeeper Abbitati. He doubled his tally right after second half began as Portuguese winger Nani exquisitely sent in a deft through ball in Rooney’s path with the outside of his right foot from the left flank and the No.10 made no mistake in tapping it in the back of the net.

South Korean ace Park Ji-Sung made in 3-0 in the 59th minute with a lovely finish from close range before Darren Fletcher’s header not long after completed a 4-0 victory at Old Trafford and a 7-2 annihilation over two legs.

The two face-off again on Thursday, incidentally 11 years since the fateful loss at the hands of Sir Alex Ferguson’s men. It would also be as long since Milan have found themselves contesting for trophies on the European front.

Manchester United pose a threat to Milan’s hopes few other teams can, with them coming into the clash high on morale after a resounding 2-0 victory in the Manchester Derby, whereas Milan themselves comfortably dispatched Hellas Verona with the same scoreline.

Both the teams sit second in their respective leagues and the UEFA Europa League remains one realistic prospective trophy this season.