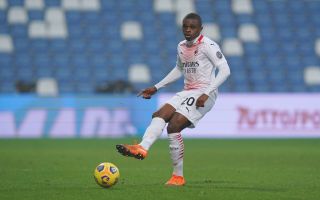 Kalulu praises Pioli and the coaching staff: “We are young and it is easy for us to integrate”

Defender Pierre Kalulu has insisted that AC Milan are a ‘strong and united group’ and that he is happy to be able to contribute.

The Rossoneri acquired the young Frenchman from Lyon in the summer having snapped him up on a free transfer thanks to the charm offensive of Paolo Maldini.

There were some eyebrows raised when he was named in the starting line-up for the win over Sparta Praha earlier in the month as a centre-back – given he is more of a natural right-back – but he helped keep a clean sheet.

He was then rushed off the bench for his first ever Serie A appearance last Sunday as Matteo Gabbia went down injured during the opening minutes of the 2-2 draw with Parma, and he started again and scored his first goal for the club in midweek against Genoa.

Kalulu spoke to the microphones of Milan TV after the victory in Emilio-Romagna, with his comments transcribed by MilanNews.

When he arrived many assumed him to be a right-back, but he is showing he is able to play centrally too.

“I also played a central defender at Lyon and then as a full-back. I took my measurements and I feel good with the team.

“We are a strong and united group thanks to the coach and the staff. We are young and it is easy for us to integrate.”

On the advice of Romagnoli and Pioli: “The coach and Romagnoli help me a lot both mentally and tactically. Pioli gave me confidence and told me to train hard while Romagnoli gave me the defensive measures.”