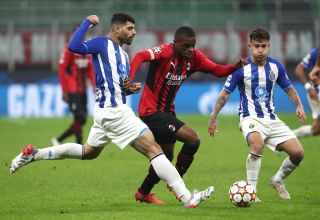 Kalulu rues missed opportunities in Porto draw: “We had chances, but we also lacked a bit of luck”

AC Milan defender Pierre Kalulu reflected on a ‘difficult’ clash against Porto by claiming that the Rossoneri ‘lacked a bit of luck’ to turn one point into three.

Milan went into tonight’s game at San Siro knowing that they needed to win in order to have any real hope of making the top two in the group and therefore the knockout stages of the competition, but they were held to a 1-1 draw.

Luis Diaz was the man who got the first goal in the opening exchanges after Grujic had taken possession off Bennacer in a pretty rough manner, and it was Kalulu who came off the bench to provide the equalising goal.

Kalulu spoke to Amazon Prime Video after the game to give his thoughts on what was very much a game of two halves in which the Rossoneri struggled for the first 45 minutes but came away feeling unlucky not to win.

“We missed the extra goal, it was difficult. We had chances, but we also lacked a bit of luck in both penalty areas,” he said (via MilanNews).

“Tension is normal in the Champions League. In the first half they put a lot of pressure on us, but in the second half we had the will to do more and show everyone that we can play for it. But football is like this: you can’t can always win.”