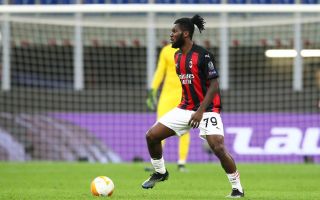 AC Milan midfielder Franck Kessie believes that he and his team-mates missed out on a big opportunity to beat Manchester United and knock them out.

The tie was beautifully poised heading into the return fixture thanks to Simon Kjaer’s injury time equaliser in the first leg, which cancelled out Amad Diallo’s header that had given the home side an undeserved lead based on the balance of play.

In the end the return leg would be a very cagey one too and it was one goal that decided it from a €100m man off the bench, as Paul Pogba lifted the ball into the roof of the net from close range to give United the goal they needed to go through.

Milan were the better side overall in the two legs but injuries was their undoing, and Kessie believes that it is a big missed opportunity. The Ivorian was interviewed by Sky Italia at the end of the game, with his comments transcribed by MilanNews and translated below.

On the match: “We could have done it, we shouldn’t have lost, we didn’t take advantage of the first leg. If we had drawn 0-0 we would have gone to the quarter-finals.”

On the goal taken: “We missed a ball in our area and we paid for it immediately, when you score a goal then it’s hard”.

On the difficulties: “We fought until the end, we must get back to working on the championship until the end”.

On the top four race: “It’s our goal, we have to fight to the end to get to the Champions League, we just have to do that and we can do it.”