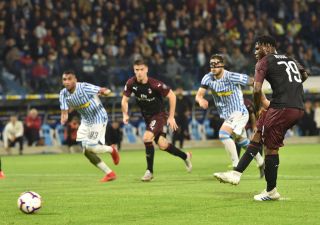 Tomorrow evening, SPAL will take on AC Milan at Paolo Mazza in the 29th round of Serie A. The Rossoneri are coming off an impressive, albeit quite dull, 2-0 win against Roma which saw them close in on the Giallorossi.

If Stefano Pioli’s men weren’t the favourites last time out, they certainly are now as they have started the resumption in the best way possible. Therefore, they might not be the most exciting bet, although you can always check out some online betting codes.

The manager is expected to make a few changes to the team, per MilanNews.it, as a tough schedule awaits after the SPAL clash: Lazio, Juventus and Napoli. It will thus be necessary to save some energy and this is the game to do it.

Lucas Paqueta will replace Jack Bonaventura, who has been very disappointing as of late, while Davide Calabria-Andrea Conti and Samu Castillejo-Alexis Saelemaekers will battle it out. Other than that, though, the starting eleven will be the usual one.

This means that Franck Kessie, who was very successful last time Milan visited SPAL, will be playing from start alongside Ismael Bennacer. Take a look at the top ten facts and stats about the game below, as provided by Opta.

Hopefully, Milan will clinch another three points and continue the positive trend. The goal, of course, is to leapfrog Napoli and perhaps even Roma in 5th place. This won’t be easy and they will need every point they can get.