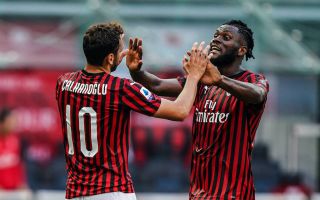 There were a few surprised faces when Hakan Calhanoglu put the ball down to take the penalty that sealed Milan’s win against Roma at San Siro on Sunday.

The Rossoneri were awarded a spot kick in the final two minutes as Theo Hernandez was tripped over by Chris Smalling when trying to retrieve a loose ball inside the area.

Rather surprisingly it was Calhanoglu who took the spot kick, with Mirante guessing the right way but having no chance to save a powerful and well-placed penalty.

As DAZN noted on their broadcast (via Calciomercato.com), Franck Kessie is indeed the player who has been appointed by Stefano Pioli as the designated penalty taker when Zlatan Ibrahimovic is not on the pitch.

However, Calhanoglu asked his Ivorian team-mate if he could take it instead – clearly feeling confident to take on the responsibility – and Kessie obliged. Thankfully, it would prove to be a good decision.