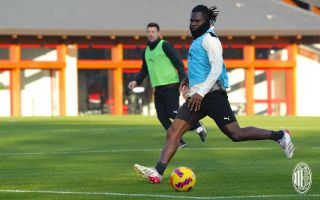 MN: Milan’s hopes and why Spurs have overtaken PSG – the latest on Kessie’s future

A new team are leading the race to sign Franck Kessie but AC Milan are still hoping that the situation changes, according to a report.

Kessie’s contract is currently set to expire at the end of the season and there has been an abundance of speculation suggesting that he will leave the club after what will be five years by next summer in favour of trying a new experience elsewhere.

According to MilanNews, the idea of him moving to Paris Saint-Germain has cooled down in recent weeks. Leonardo knows that he needs to recruit more French players for their squad list which means for the moment – or possibly permanently – their pursuit of the Ivorian is frozen.

However, Antonio Conte’s Tottenham are now on pole position to land Kessie, but the Milan management remain hopeful that he might still have a change of heart and realise how good it would be to stay Milan.

READ MORE: Milan confident regarding Romagnoli’s renewal – it could be done by Christmas