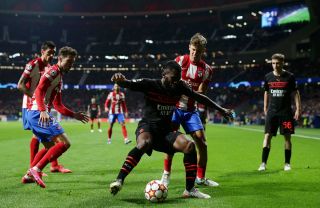 AC Milan did what they needed to do this evening as a late Junior Messias goal was enough to snatch the win at Atletico Madrid. Franck Kessie played a key part in that as he assisted the Brazilian’s header.

The Ivorian midfielder had a great game this evening and was awarded a 7.5/10 in our player ratings, which you can read here. His performances haven’t been all that great lately but tonight, he certainly showed just how important he can be.

Speaking to MilanTV after the game, as cited by MilanNews, Kessie shared his thoughts on the win, Atletico Madrid and the deciding clash against Liverpool. For sure, it should be a great game underneath the floodlights at San Siro.

“We are all happy with this victory. Last year, we dreamed of playing the Champions League, we have to show everyone that we are Milan and we can play against any team.”

“We follow the coach and try to do whatever he asks. We are working hard at Milanello to play this type of match.”

“Atletico is a great team, they are playing Champions League every year. We are back after a long time. Today it was important to fight for every ball, the coach told us it was a very physical team.”

On the next matches…

“Today we are happy with what we have done, the Champions League is not over yet. Now let’s go back to Milanello to work even more and do even better than tonight.”

On the San Siro clash against Liverpool…

“We ask our fans once again to come to the stadium and be the twelfth man on the pitch.”

“It’s normal, after 90 minutes at this level and pace I’m tired. But I’ll be back tomorrow (laughs, ed),” he concluded.

It remains to be seen if Kessie will renew his contract with Milan, given that the current one will expire in the summer. Talks have been going on for a long time but there is still no agreement.

READ MORE: Messias analyses his ‘instinctive’ goal and dedicates it ‘to those who believe in me’