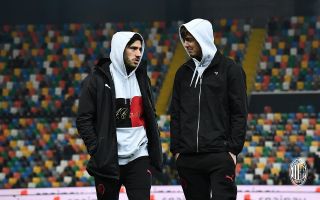 Ibra milestones and a worrying run: All the key stats from Milan’s draw against Udinese

AC Milan failed to get the three points they needed to ensure top spot heading into the Napoli game as they drew 1-1 at Udinese last night.

Zlatan Ibrahimović scored his seventh goal of the season to level things up in the second minute of added time at the end of the 90 minutes, responding after Beto’s first half goal that had given then home side the lead. Below are the best stats from the game courtesy of the club’s official website…

➤ Zlatan Ibrahimović became the third player to score 300 goals in Europe’s top five leagues in the 2000s, after Cristiano Ronaldo (483) and Lionel Messi (475).

➤ Milan scored with their first and only shot on target in the match.

➤ Ibrahimovic had not scored a Serie A goal in stoppage time since November 2020 against Verona (92:11).

➤ Theo Hernández played his 100th match in all competitions for Milan.

READ MORE: Maldini waiting for green light to accelerate for No.1 target – what could favour Milan