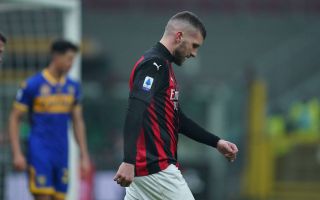 Kickest: Can Rebic be a suitable deputy centre-forward? His recent numbers

There seems to be intense debate among pundits and the AC Milan fan base at the moment as to whether Ante Rebic is a capable auxiliary centre-forward.

Zlatan Ibrahimovic has missed the last five games due to a thigh problem and although Milan have won three and drawn two in that stretch, Rebic is yet to score a goal all season despite starting up front in four of those games.

As reported by the editorial staff of Kickest (via MilanNews), the Croatian – in the last 3 games he has played as a striker with Milan in Serie A (against Fiorentina, Sampdoria and Parma) – has a percentage of aerial duels won of 32% (9 out of 28).

Rebic also only managed to dribble past his opponent twice in three games. He has amassed an assist which came as he squared for Castillejo, as well as two key passes and 35 successful passes (out of 50 total).