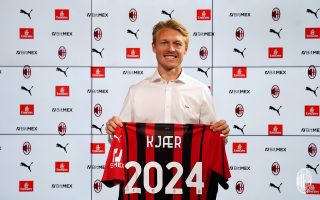 Simon Kjaer has expressed his delight at having sealed a renewal with AC Milan, revealing that he wishes he had spent his entire career at the club.

There had been persistent rumours over the past few weeks stating that Kjaer was closing in on extending his deal with the Rossoneri, which was set to expire in June 2022, and last month the club confirmed that he has extended his stay by two years until 2024.

The 32-year-old central defender is now on international duty with Denmark, who he is the captain of, and he spoke to BT about how he feels being a Rossoneri player with his comments relayed by MilanLive.

“No club in the world could have called me and ask me to play for them if there was also the offer from Milan. I wouldn’t change my career. Indeed, I would have liked to play for 15 years for Milan. Anyway, looking at my career, at the places I’ve been and experiences, I couldn’t have written it better,” he said.

By 2024 – the year his new deal runs until – Kjaer will have reached 34 years of age and he was asked about the possibility of retiring as a Milan player.

“Yes, I see it [my career] ending at Milan. Milan is the best place for me for the role I have in the team, the relationship with the manager and the way we play. Furthermore, my children and my wife live happily in Milan.”

As far as the contract renewal is concerned, Kjaer is thrilled to have signed a two-year deal and not just a one-season extension.

“The renewal says a lot about my status in the team. The club usually has a policy that it does not extend to players over 30 for more than a year. I have extended by two and this is the greatest sign the club could give me . I’m happy, I couldn’t be in a better place.”