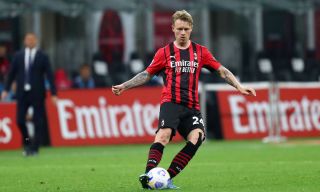 AC Milan defender Simon Kjaer has undergo a successful surgery on his left knee and will be ‘back even stronger than before rather sooner than later’, his agent has claimed.

There was a real moment of worry during the opening five minutes of Milan’s 3-0 victory at Genoa on Wednesday night as Kjaer got beaten on the dribble by Andrea Cambiasso and as he turned he sustained some damage to his knee, which was seen in the fact he was stretchered off while clearly in a lot of pain.

Il Corriere della Sera are among the sources that have claimed the 32-year-old will have to undergo arthroscopic surgery on his left knee to repair damage to his cruciate and his collateral ligaments, which in turn means he is heading for six months out and his season could well be over.

Kjaer’s agent Mikkel Beck took to Twitter to give an update on his client’s condition and he confirmed that he underwent a successful operation on his knee.

“Simon Kjaer today underwent a very successful surgery on his knee. He will be back even stronger than before rather sooner than later,” he said.