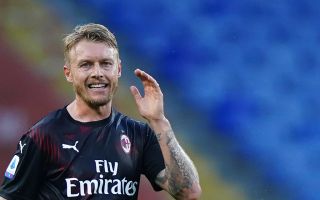 Kjaer confident ahead of clash and shares thoughts on Ibrahimovic: “It’s the world we live in”

Milan will take on Bodo/Glimt in the third qualifying round of Europa League this evening, aiming to secure their spot in the play-offs. However, with injuries and a few absences in mind, it might not be easy.

The Rossoneri will have to do without Leo Duarte and most notably Zlatan Ibrahimovic, who tested positive for the Coronavirus. Ante Rebic is still suspended and will also miss the game, meaning Lorenzo Colombo will start up front.

In an interview with DAZN (via MilanNews.it), who will broadcast the game in Italy, Simon Kjaer spoke about the game and the absence of Ibrahimovic. Down below are his quotes in full.

“I’m fine, we’re working on the physical part every day.”

What team do you expect to face tonight?

“A team that comes with such confidence because they have won so many games in Norway. We have to do our job, we have the utmost respect for them but we have to play the game ourselves.”

“It’s the world we live in. Let’s just think about the match and let’s go on like this,” he stated.