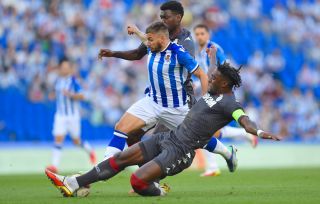 The injury that Simon Kjaer sustained in the win over Genoa could force AC Milan to accelerate their pursuit of a Monaco defender, it is claimed.

The Rossoneri ran out 3-0 winners as an early free-kick from Zlatan Ibrahimovic opened the scoring before Junior Messias scored each side of half-time, but there was a sour note as Kjaer was stretchered off in severe pain in the first half after what looked like a twisted knee.

Calciomercato.com report that Milan could now bring forward their search for a new centre-back by six months and they have a target in mind already in Benoit Badiashile. The 20-year-old Monaco starlet has long been admired by Milan and his profile has already been approved by the Rossoneri scouts.

Kjaer’s injury could speed up negotiations with Monaco in view of the January transfer window, as bolstering the rearguard could become a priority if he were to end up missing a few months, with Alessio Romagnoli and Matteo Gabbia both struggling somewhat for form.