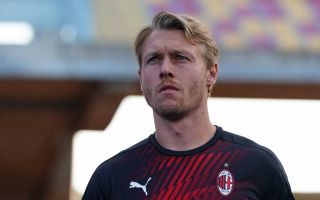 Arriving on loan from Sevilla in January, Simon Kjaer has been one of the AC Milan’s best players in the second half of the season. It didn’t exactly come as a surprise, therefore, that the Rossoneri decided to sign him.

The Danish international has been crucial for Stefano Pioli’s side, forming an impressive partnership with Alessio Romagnoli in the centre of the defence. To top it all, Milan only had to pay €3.5m to secure him on a permanent basis.

In a long interview with Goal, Kjaer was asked about his move to Milan and the first months at the club. The defender revealed that he has always wanted to play for the club, ever since he moved abroad to Palermo 12 years ago.

“Milan is simply Milan. It has always been a special club for me. Since I went abroad as a young player 12 years ago and arrived in Palermo, this was simply the club for me. Back then I told my agent that one day I would love to play in that red and black jersey.

“It has been close a few times before, but now the timing was right. Milan is a gigantic club with a gigantic history. I honestly believe that it is a privilege to play here and at the same time have the opportunity to help bring this club back to where we belong,” he began.

The Rossoneri have undeniably improved a lot in the second half of the season, bouncing back from what as a terrible start. Kjaer shared his thoughts on the progress and the future.

“Since I arrived in January, we have been working hard, developing as a team, and I have seen great progress. We have a very young team with a lot of potential, and I believe that here in 2020 we have shown the way back to the top.

“It will demand a great deal of work from everybody, but I believe in a bright future for AC Milan. We have the history, the winning mentality, the passionate support of our fans, and great ambitions,” he continued.

Finally, the defender praised the club and the fans for the support he has received since his arrival. Hopefully, he can continue his great run of form beyond this season.

“You can sense football in the air in Milan – San Siro, Milanello, Casa Milan as the headquarters, supporters everywhere. Everything tells you that AC Milan is a great club, one of just a few global clubs with an amazing history and a great future. I am happy that I will now be a part of this future, and I will give everything for this club.

“The fans have received me so well. Right now, because of the corona crisis, we miss them in San Siro, and everybody in football knows how much a great home crowd means to the players.

“However, still we manage to get great results even without their support in the stadium. We still play for them, even when they are not there,” he concluded.