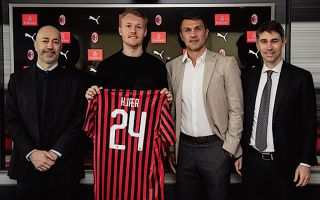 AC Milan signing Simon Kjaer has undergone his first training at Milanello with his new team-mates, and has sent a message to fans on social media.

The Denmark international has cut short his time at Atalanta and joined the Rossoneri on a six-month deal, and Milan have confirmed that there is an option to buy in June.

After signing his contract at Casa Milan, Kjaer went to train with the rest of the team, but he uttered his first words as a Milan player on social media ahead of his official unveiling on Thursday.

“First training done! Happy to be a new @acmilan player,” he said.